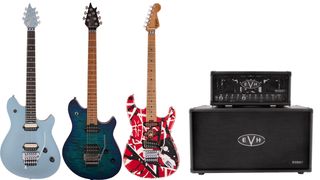 The red, white and black striped Frankenstein is one of the most iconic electric guitars in rock history, and this 2020 Striped Series Frankie is sure to be the center of attention in a launch that also includes three Wolfgang Specials in metallic finishes, 13 Wolfgang WG Standards in a variety of solid finishes and premium spalted and quilted maple tops, and a revoiced, black-on-black EVH 5150III 50S 6L6 50-watt amp head and matching 2x12 cabinet.

The Striped Series Frankie features a basswood Strat body with a bolt-on quartersawn maple neck with an oil finish. It has a 12"-16" compound radius maple fingerboard with 22 jumbo frets – after all, no one's rocking up to see how few notes you play on this guitar – and an EVH Floyd Rose double-locking tremolo for those all-important divebombs and squeals. An EVH D-Tuna on the bridge allows you to effectively toggle between standard and drop D tuning on the fly, which is a real blessing on Floyd-equipped guitar.

Pickups-wise you've got an EVH Wolfgang humbucker in the bridge and a Dummy Strat pickup in the neck, and controls that reflect the homebrew feel of the original. There's only one control and it's labeled tone but is really volume. There's a dummy five-way blade switch too. Hey, all the action is going to be on that fretboard, and working that Floyd.

Elsewhere the Wolfgang Special sees a release in Burgundy Mist Metallic, Deep Purple Metallic and Ice Blue Metallic. The latter two have gloss finishes while the Burgundy Mist is satin. All have basswood bodies and bolt-on quartersawn maple necks that are reinforced with graphite and have been profiled as per Eddie Van Halen's spec. The Wolfgang Special offers a 12"-16" compound radius ebony fingerboard and 22 jumbo frets and is equipped with two direct-mounted EVH Wolfgang humbuckers in the neck and bridge.

Now, the electronics are pretty interesting. Here we've got a 500K EVH Bourns Low-Friction volume pot for making quick work of those trademark swells, while a 250K EVH Bourns High-Friction tone pot let's you dial in your tone but more importantly stops you knocking it off ten while messing with the volume. A three-way toggle lets you select each pickup or both.

Finally, the hardware on the Wolfgang Specials looks solid, with an EVH Floyd Rose locking tremolo as standard and EVH D-Tuna.

New for 2020, there are 13 Wolfgang WG Standards. All have basswood bodies, with the option of neat solid-color finishes or quilted- or spalted maple tops. The WG Standards feature bolt-on maple necks with 12"-16" compound radius baked maple fingerboards and 22 jumbo frets to keep the feel consistent across the Wolfgang models.

There is a pair of EVH Wolfgang humbuckers direct-mounted in neck and bridge positions, a three-way toggle switch on the shoulder and volume and tone controls. At under 500 bucks, you don't get a D-Tuna, but you do get an EVH Floyd Rose Special double-locking tremolo.

EVH Gear's Winter NAMM 2020 signs off with the EVH5150III 50S 6L6 amp head and cabinet. A 50-watt head with a pair of Shuguang 6L6 power tubes and seven 12AX7 tubes in the preamp, it promises Eddie Van Halen's tour tone in a smaller and lower-powered format.

No dimensions have been given just yet but we would imagine that it would be sized as per existing EVH5150III heads. What's beyond doubt is that this will sing.

As with previous amps in the series, the EVH5150III 50S has three channels. Channel one is where you'll find glassy cleans, channel two has plenty of gain for crunch and sustain and has been revoiced for this release to deliver improved definition in the low-mid frequencies. Channel three has also been revoiced to improve its low-end. Here, EVH evocatively says it "oozes with increased liquid gain," which is something we can all get behind.

Aside from the revoiced channels, the setup should be the same. Channels one and two share a three band EQ and have independent gain and volume controls, while channel three has an independent three-band EQ, volume and gain. The amp has global presence and resonance controls. There is also adjustable bias, selectable impedance between 4, 8 or 16 ohms, a MIDI input, parallel speaker outputs, and a four-button footswitch.

Now we have even fewer excuses not to nail Eruption in 2020.

Check out our NAMM 2020 hub for more hot gear news.