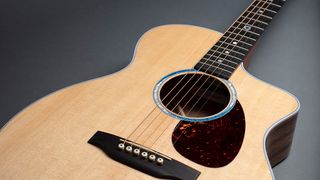 NAMM 2020: Although Martin unveiled the majority of its 2020 range ahead of the show, it saved the best for last, with the radical new SC-13E, which “seeks to rethink what an acoustic-electric guitar can do”.

The SC-13E boasts an asymmetrical body shape for a balanced output that seeks to deliver more gain before inducing feedback, but the other big change appears around the back of the guitar, courtesy of a revolutionary new cutaway.

This model marks the debut of Martin’s patent-pending Sure Align neck system, which removes the heel, allowing you to access every one of its 20 frets.

That neck is low-profile, giving it more of an electric feel, and accordingly, comes strung with .011-gauge strings from the factory.

The guitar’s top is Sitka spruce, while the back and sides have a koa veneer, all topped off by blue accents on the rosette, fingerboard and binding and visible internal X-bracing.

Fishman’s MX-T electronics also make an appearance, with a discreet tuner built into the soundhole.

Remarkably for a design with this much R&D (over 30 prototypes were made during the course of the process, apparently), the SC-13E’s street price will come in at a respectable $1,500.

This is a radical new design for the contemporary acoustic guitar, and one that went down very well at the show - its shape even mirrors the increased interest in offset electric guitars. Other acoustic builders are going to have to do something pretty special to top this.

For more info, head over to Martin Guitar.