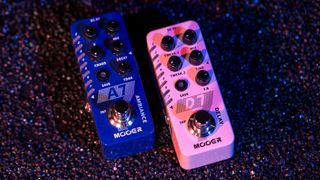 NAMM 2020: Mooer Audio has announced two new additions to its recently revamped Micro Series. Earlier this year, the Chinese effects experts released the Tone Capture and E7 Synth pedal. For 2020, the company has announced the A7 Ambiance reverb pedal and the D7 Delay.

Both pedals will come packed with tone-shaping features, all housed in a compact form factor.

The A7 Ambiance features seven different reverb effects with the ability to shape the reverb tails with the Infinite Trail function or the more traditional Trail On function. The pedal also features an array of controls allowing endless customization, and the ability to save settings as presets.

The D7 Delay houses 6 customizable digital delay effects, with LED lights on the side of the unit indicating the current setting. The seventh light indicates the built-in looper that can be used in tandem with any delay setting.

The pedal will also include a Trail On function, which will allow the current delay to fade out naturally, and Tap Tempo functionality, which allows the user to easily set the desired delay timing. The ability to save presets is also included.

For more information, head to Mooer.