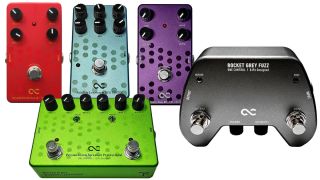 NAMM 2020: Hundreds of groundbreaking and innovative guitar pedals are expected to be released at this year's show. Among them are four new stompboxes from Japanese company One Control, in collaboration with Swedish pedal design legend, Björn Juhl.

The new releases include the Blackberry Bass Overdrive, Pale Blue Compressor, Rocket Grey Fuzz and Dyna Red Distortion 4K, all of which conform with the company's existing color-themed visual aesthetic and naming convention.

The Blackberry Bass Overdrive is lightweight and, as you probably guessed, designed for bass players, but works for guitarists, also. The pedal helps players achieve a sound similar to a large tube bass amp being driven hard at concert volume, but in a compact format.

One Control has taken the very first BBOD (Baby Blue Overdrive) model and added a body knob, allowing users to precisely dial in their desired level of mid-range body.

The Pale Blue Compressor features an intelligent attack/decay circuit, which One Control say will automatically adjust between long and short transients for a "fader riding" effect.

It also features a very low-noise amplifier circuit that enables it to be used both before and after overdrives, fuzzes, and distortion pedals.

The Rocket Grey Fuzz features an input circuit which optimizes the sensitivity for guitar, enabling players to engage both the octave up and standard fuzz circuit without needing to adjust the tone.

According to One Control, the tone of this pedal is much purer and less ring modulated than older designs.

The Dyna Red Distortion 4K is a multi-purpose and highly adaptable distortion stompbox. One Control says: "If you want to have complete control of a wide range of heavy gain, the Dyna Red 4K will give you all that you desire."

Its dynamic qualities means it works as well with solid-state amps as it does tube amps.