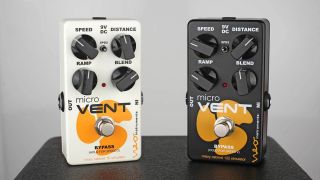 Those looking for a high-quality Leslie simulator in a small enclosure, your ship has come in with the unveiling of Neo Instruments' micro Vent 16 and micro Vent 122.

What's the difference? Well the micro Vent 16 in white simulates a Vibratone guitar Leslie while the micro Vent 122 takes the algorithm from Neo Instruments' Ventilator II to deliver that Leslie 122 vibe. Both mini-pedals have a similarly small footprint and easy-to-use setup.

Let's look at the micro Vent 16. Its algorithm replicates the sweet, sweet swirling retro-mojo of a Fender Vibratone. Compared to the micro Vent 122, it is more subtle. The effect is controlled by Speed, Ramp, Distance and Blend controls.

Speed adjusts the initial speed of the effect, running slow to fast, while Ramp controls the acceleration and deceleration of the rotors when changing the speed. Distance controls the positioning of the virtual mics, with lower distances offering deeper modulation, while Blend mixes your dry signal with the processed signal. A toggle switch selects between Slow, Stop, and Fast Speeds.

The micro Vent 122 shares the 16's controls and setup but aims for the more dramatic effect of a Leslie 122 rotary speaker. Expect deeper modulation, deeper movement. And in lieu of demo videos for the micro Vents, check out the video demo below of the Ventilator II, which should give you an idea of what to expect from the 122.

Both pedals take 9V of DC power, can be run with true or buffered bypass.