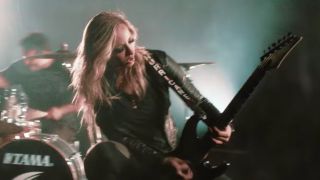 Nita Strauss has shared a new round of U.S. tour dates in support of her recently released debut solo album, Controlled Chaos. The run kicks off in Hermosa Beach, California on April 10 and wraps in Poughkeepsie, New York, on June 8.

Straus has also announced a new vinyl version of Controlled Chaos, set for release April 12. In a recent cover story with Guitar World, Strauss discussed the impetus behind the album:

“I wanted to make an instrumental record that was accessible to everyone, not just fans of instrumental guitar music, if that makes sense,” she said. “The idea was to give each piece a conventional song structure, so non-guitarists would have a format they could follow. I see Controlled Chaos as a gateway drug into the world of instrumental music. There’s just so much incredible guitar music out there — like the new records by Jeff Loomis and Andy James — I thought that, perhaps, if the average listener enjoyed what I did, they might branch out and buy all these other great, modern shred albums that come out every year.”