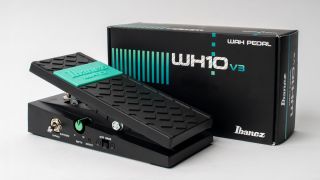 Hot on the heels of news that John Frusciante is returning to Red Hot Chili Peppers after a decade away, the electric guitar player's favorite pedal is also returning, as Ibanez has unveiled a V3 version of its WH10 wah.

The pedal, Frusciante told Vintage Guitar in 2009, “is my standard wah since [1991’s] BloodSugarSexMagik. I don’t think there’s a better wah. When we were making [2006’s] Stadium Arcadium, there was so much wah I figured I’d use a variety of pedals and there wasn’t one that came close to the Ibanez.

Like the original WH10, the new V3 boasts a multiple feedback op amp circuit, along with two upgrades – a sturdy metal housing in place of the original’s plastic and a switchable true/buffered bypass feature.

Other appointments include a depth knob on the side of the pedal to control the level of effect, as well as a range switch (guitar 350Hz - 2.2kHz, bass 175Hz - 1.1kHz).

We have to say, the timing is simply perfect for this one... A little too perfect. Was the launch of a new WH10 at Frusciante's behest? And if so, Ibanez must have known about his return for some time. Wonder what other gear he's requested for RHCP's upcoming tour dates...

You can get hold of your own V3 now for $129.99 - and cop Frusciante's playing with our guide to his guitar sound and style.