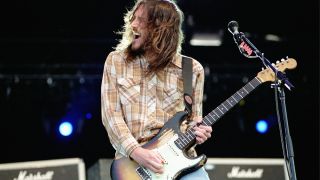 John Frusciante is most famous for being the electric guitar player with the Red Hot Chili Peppers for two of the most successful periods in their history.

During these spells, they released albums such as BloodSugarSexMagik, Californication, By The Way and Stadium Arcadium. Frusciante has also been extremely prolific as a solo artist over the years.

His style as a guitarist is emotional, expressive, creative, funky and dramatic. There are numerous elements of his approach and technique that make him a highly distinctive guitarist.

Some of these are outlined below to enable you to develop and learn from his highly regarded playing style.

To really get the Frusciante style in great detail, you should look into each of these points more thoroughly and others beyond this list, but this is a great overview of getting into his mindset as a guitarist and beginning to replicate the style.

String meeting has two main connotations in John Frusciante’s style. The first is the muted strums between chords in a progression or using muting to lightly damp the chords themselves to create intricate funky rhythmic rhythm guitar parts. A perfect example is If You Have to Ask, in which muting is used to make the otherwise very simple rhythm part tight and expressive.

The second use of muting in Frusciante’s style is something he often does when playing single-note lines. He uses the other fingers of his fretting hand to mute the five strings not being played, meaning he can be ‘strum’ the single note - ie, he plays all six strings, but only the relevant one note sounds because the other five strings are muted. This process enables the single-note lines to be played with more conviction and attack. Examples here are Can’t Stop and Scar Tissue.

To get his style, you should practice both these forms of muting - the specific tracks mentioned above would be ideal places to begin.

It’s how Frusciante uses these scales that is distinct. His soloing style is half-drawn from the rock/blues soloing of legends like Hendrix and Page, and half-influenced by the modern electronic music Frusciante loves. What results is a style that is as expressive and melodic as it is dramatic and powerful.

As with all soloing practice, the best thing to do is to learn solos and licks to build up your vocabulary in that style. I would suggest starting with some of his live solos, as these tend to be even more expressive melodic semi-improvised versions of those in the recorded originals.

This is an area where Frusciante has been heavily influenced by Hendrix, Curtis Mayfield and those who went before. However it's still absolutely key to his rhythm guitar style, particularly in electric guitar parts.

A perfect example is the second verse of Under The Bridge, where an otherwise simple chord progression is embellished and played with fills.

An example from Jimi Hendrix would be Little Wing, where most of the song passes by without any chords played in a straight and standardized way. Frusciante has previously cited Hendrix and this song in particular as an influence.

Key to this style is sliding in and out of chords, using fills and embellishments to create a blend of rhythm and lead guitar that is both thoroughly interesting and does a fantastic job of filling a soundscape that could otherwise be a little bare in a band line-up containing only one guitarist.

The perfect place to begin is with either of the songs mentioned above. Break down the component parts into individual phrases if you need to understand the style or technically get a grip on these ideas.

Often present in Frusciante’s live guitar parts and his studio overdub is the playing of essential intervals of a chord rather than the full voicing, ie, plucking or strumming just a chord’s root and 3rd to create a more reserved melodic version than simply strumming the full barre chord.

There are many songs that feature this approach, but Scar Tissue is the prime example, because the entire guitar part is constructed around this idea.

The important thing here is to know within any chord shape which note is the root, which note is the 3rd, which is the 5th and so on. This enables you to reduce the chord to any combination of its flavors at will, should you want to replicate the style.

This is particularly relevant with regard to the final years of Frusciante’s time with RHCP. The majority of guitar solos on Stadium Arcadium (by far his most guitar solo-heavy work with the band) and just about all live guitar solos 2004-2007 were played with wah.

This made Frusciante’s leads extremely expressive, especially when used on speedier licks, such as the fast final flurry in Dani California.

Frusciante is known for using an original Ibanez WH10 pedal. These can be difficult to track down (true story: Frusciante once bought one from Eddie Van Halen), but you can find them on online auction sites, while Ibanez released the WH10V3 for 2020 in an attempt to meet this demand.

To some extent, any wah pedal will do the job, if you don’t have the budget or can't find the WH-10. However, once you're plugged into a WH-10, it's instant Frusciante, as this model boasts a distinctive sound with more body than many other wah pedals.

With the exception of the stripped-back arrangements of the Californication album, Frusciante’s work with the Chili Peppers was heavily overdubbed with multiple guitar parts, as he created arrangements of layered sounds, harmonized solos, twinkly lines and soundscapes.

This is present in so much of his work, and in fact, some of his solo albums have included instrumental tracks that only utilize multi-tracked guitar parts to create beautiful textured tracks, such as Ramparts, from the album To Record Only Water For Ten Days.

Whether it's with a loop pedal or recording software, layering and overdubbing parts is something you should practice. It's great fun, it teaches you about arranging and harmony and it opens up many potential creative opportunities. So have fun with it!

Alex Bruce is a writer for GuitarTricks.com