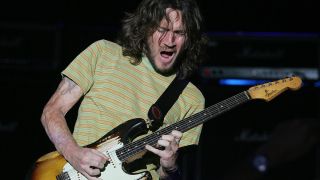 It’s the day many Red Hot Chili Peppers fans thought would never come: John Frusciante has returned to the iconic LA funk outfit, almost exactly a decade since he announced his most recent departure.

Frusciante will replace Josh Klinghoffer, who has served as guitarist for the band’s past 10 years, including albums I’m With You and The Getaway.

The band broke the news on Instagram, writing, “The Red Hot Chili Peppers announce that we are parting ways with our guitarist of the past 10 years, Josh Klinghoffer.

“Josh is a beautiful musician who we respect and love. We are deeply grateful for our time with him, and the countless gifts he shared with us.

“We also announce, with great excitement and full hearts, that John Frusciante is rejoining our group. Thank you.”

There’s no news as to whether the band’s future plans involve a new album, but Frusciante looks set to join long-serving members Anthony Kiedis, Flea and Chad Smith for a run of festival dates in May and June next year.

This marks Frusciante’s second comeback with the band; his first departure took place shortly after the release of landmark album BloodSugarSexMagik back in 1992, before returning in 1999 for the seminal Californication.

In the years since his split from the band, Frusciante has spent much of his time working on electronic music, documented on a pair of EPs under the alias Trickfinger. His last album with RHCP was 2006’s Stadium Arcadium.

While we wait to hear the first fruits of the reformed classic line-up, you can sprinkle your playing with a little Frusciante magic with our guide to the Red Hot Chili Peppers guitarist’s sound and style.