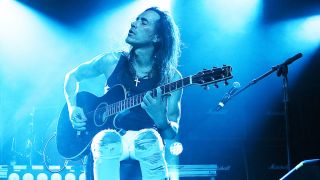 Celebrated rock photographer Mark Weiss recently released a massive illustrated tome, The Decade That Rocked, chronicling his iconic portraits and live shots of everyone from Van Halen to Ozzy Osbourne to Motley Crue.

To celebrate the book, Weiss appeared the Oh Say Can You Stream podcast, hosted by Thom Hazaert and Megadeth bassist Dave Ellefson, alongside two of the electric guitar players he has shot over the years, Zakk Wylde and Nuno Bettencourt.

During the conversation, Wylde recounted the oft-told story about how Weiss, a fellow New Jersey native, was the one who ultimately connected him with Ozzy Osbourne. “Mark got me the gig with the boss,” Wylde says simply.

Soon enough, Bettencourt joined in on the Ozzy talk – and the story he told is a new one, for sure.

The Extreme guitarist begins by revealing that, as a 15-year-old kid in 1982, he attempted to land the Ozzy gig following Randy Rhoads’ death – a  job that ultimately went to Night Ranger’s Brad Gillis.

“I remember reading Circus or maybe Hit Parader [magazine] and there was an ad that said, ‘Ozzy looking for guitarist – send your demo here,” Bettencourt recalls.

Bettencourt recorded himself playing Crazy Train and I Don’t Know, and submitted the cassette… but never received a response.

Fast-forward more than a decade, and Bettencourt was actually offered the guitar slot in Ozzy’s band following Wylde’s departure.

“Cut to 1994 and [Extreme] is opening for Aerosmith in London,” Bettencourt says, “and [agent] Rod MacSween comes over.”

MacSween, he recalls, told him, “Hey, I just got a call from Sharon [Osbourne] on the way here. She said, ‘Talk to Nuno. If he wants, there will be a jet at London Heathrow. If he leaves right now he can go straight on tour [with Ozzy]. No audition.’”

Bettencourt goes on to joke that when MacSween finished his pitch, all he could muster to say was, “They finally heard the cassette?”

Bettencourt ultimately turned down the gig, which, he says, “was a stupid mistake, because then [Extreme] broke up, like, three weeks later.”

While we may never know what an Ozzy/Nuno collaboration might sound like, we do have this video of Bettencourt tackling the Randy Rhoads classic, Dee, from Ozzy’s 1981 solo album, Blizzard of Ozz.

And to pick up a copy of The Decade That Rocked, head to TheDecadeThatRocked.com.