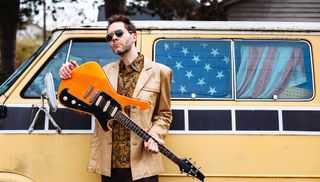 Paul Gilbert has announced North American tour dates in support of his forthcoming album, Behold Electric Guitar. The outing kicks off May 25 in Denver and wraps June 30 in Portland, Oregon.

“My initial ideas are just a starting place,” Gilbert said. “As a record goes along, it becomes more about making discoveries and getting excited about new songs. I guess the main discovery I made this time was how well it worked to write melodies from a vocal perspective — even writing pages of lyrics — and then to use those vocal ideas as a framework for guitar to take over and play the melody instead.

“It took me a long time to accept the idea that the guitar can take the place of a singer. Since I grew up listening to the Beatles, I always thought that singers should handle the melody, and that the guitar should play chords, riffs or bluesy solos. Blues is like the 'gateway drug' that lead to digging jazz. I really enjoy jazz now, which is totally surprising to me. Letting jazz elements into my playing scares me a little, because I still respect my 16-year-old self as well as all the kids out there who want to rock. At the same time, if I love something, I have to love it. And it’s really exciting to me to have opened doors into these new worlds and to be moved by what I find.”

You can check out the full tour itinerary below.