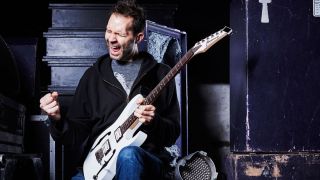 As Paul Gilbert continues to go from strength to strength, with new album Behold Electric Guitar showcasing his increasingly refined chops, it appears his pedalboard is undergoing an overhaul, as a signature JHS Pedals overdrive is apparently in the works.

On a recent Instagram post highlighting Gilbert’s session with fellow Ibanez endorsee Martin Miller, fan Josh Myers asked what amp the Mr Big guitarist was using, only for Gilbert to go one further and detail his entire signal chain, letting the stompbox cat out of the bag.

“I used a Marshall 1959HW head,” he revealed. “I ran it clean, using the second channel. For distortion, I used three pedals, in this order: JHS Bonsai (on sometimes), JHS prototype signature pedal (on most of the time), and an Xotic Effects AC Booster (on all the time).”

Epic jams with Martin Miller last week. But mostly I can’t figure out how his guitar is projecting a blue rectangle on my foot. @martinmillerguitar Paul Gilbert

Last month, the Mr Big guitarist dropped a snap of his pedalboard on the 'gram, featuring a mystery six-knobbed black stompbox.

Of course, Gilbert is no stranger to signature pedals, having previously collaborated with Ibanez on the Airplane Flanger and Homebrew on the Detox EQ - with his other secret weapon being, of course, Yamaha's tiny THR5 desktop amp.

You can hear Gilbert’s rig - including that killer-sounding new pedal - in action as he trades licks with Martin Miller in the red-hot Superstition cover below.

Is it us, or has Gilbert’s tone and phrasing never been better? We can’t wait to see what he cooks up with Josh Scott...