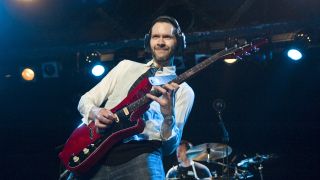 Want to play guitar like Paul Gilbert? For starters, you’ll need to practice for roughly, oh, 10-million hours or so.

But here’s another thing you can do – get yourself a coily guitar cable.

According to Gilbert, it’s the only type of cable he’ll use onstage. Why?

“I’m clumsy,” he explained to Sweetwater in a recent episode of What’s on Your Pedalboard?

“If there's a straight cable, the chances of me tripping over it and falling down and embarrassing myself are pretty high.

"And a wireless, I don't know, there’s batteries, I'd rather not use batteries. And plus, you know, Hendrix, if you look at old photos.”

Gilbert continued, “When I was a teenager I had one, so I'm re-experiencing my youth as a coily-cable user. I do have the muting jack, so that's kind of nice.”

As for whether he feels the curly cable adds any “darkness” to his tone, Gilbert replied, "I only use that one, so I really have nothing [to compare it to]. I don't someday go, ‘Well, let's compare it to a straight one.’ I always use the coiled, so I wouldn't know.”

Elsewhere in the episode Gilbert dropped all sorts of knowledge, including how he uses a pick scratch along the guitar strings to transition between playing with his fingers and grabbing a slide; that his favorite “small amount of distortion” song is Stay with Me by the Faces, and, interestingly, that he likes to watch harmonica instructional DVDs. “There’s important messages,” he says.