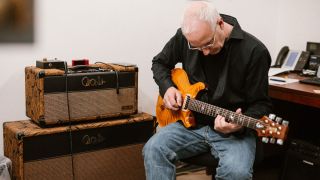 We’re all aware that Paul Reed Smith is the man behind some of the best precision-engineered electric guitars you can buy today, but did you know that he’s also been quietly developing technology that’s now sought after by national-security and medical professions?

Digital Harmonic is an advanced-imaging firm the luthier founded back in 2015, which has generated interest from leaders in aerospace, defence, auto manufacturing, and even astronomy in recent months.

The technology allows anyone to “revealing hidden data in images through brute force mathematical scoring and adjusting of pixel values based on neighborhood relationships”, according to the company’s site.

The intelligence community is interested in its ability to enhance images by removing fog or enhancing nighttime shots and x-rays, but it can also be used pick out individual instruments from a multi-track recording - so it’s not entirely separate from Smith’s day job.

While he was busy beavering away on prototypes for his first electric guitars - some of which ended up in the hands of Carlos Santana - Smith worked with his father on a PRS synthesizer, which unexpectedly resulted in a way of amplifying data from sound waves.

The pair tested the mathematical method on Stairway to Heaven, and found they were able to isolate individual instruments in the recording.

Various uses have been cited for the technology, but we’d love to see its audio applications brought to the mainstream - an easy way to pick out guitar tracks on a master recording would be hugely beneficial for learning classic songs.

Smith is torn between the two businesses, however. When asked, “Which is more satisfying for you, the music or the high-tech?” by Fox News, Smith responded:

“That's not fair. You watching Carlos Santana play on stage, playing a PRS, sorry, that's good. I'm looking at information that I know no one's ever seen before, that's good too. You can't compare the two. Both are good.”