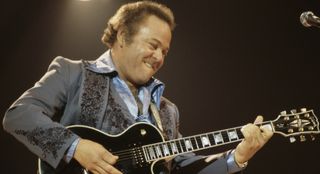 Roy Clark, country guitarist, co-host of the long-running TV series Hee Haw and Country Music Hall of Fame member, has died at the age of 85. Clark succumbed to complications from pneumonia at his home in Tulsa, Oklahoma, according to publicist Sandy Brokaw.

Clark, an incredibly gifted string musician, made his first appearance at the Grand Ole Opry at the age of 17. In 1960, Clark opened for Wanda Jackson in Las Vegas, and would go on to co-headline in Lake Tahoe with Andy Griffith and appear on Dick Clark's American Bandstand in the years that followed.

In 1963, he had his first Top Ten hit with his somber version of Bill Anderson's “Tips of My Fingers.” Six years later, he scored a second Top Ten hit with “Yesterday, When I Was Young,” and became the co-host, with Buck Owens, of Hee Haw. First airing from 1969-1971, and again in syndication from 1971-1993, Hee Haw became an iconic country music touchstone, and more than 600 episodes of the show were produced in total.

Throughout Hee Haw's long run, Clark maintained his fruitful solo career, earning further Top Ten hits with "I Never Picked Cotton" and "If I Had It to Do All Over Again.” Clark also displayed his six (or, in the case of his cover of "(Ghost) Riders in the Sky, 12)-string prowess with his instrumental covers of pieces like "Malagueña."

In 1982, Clark won a Grammy for best Country Instrumental Performance for "Alabama Jubilee," and opened his own theater in Branson, Missouri the following year. Performing at storied venues such as New York's Carnegie Hall, the Sporting Club in Monte Carlo and the Rossiya Theatre in Moscow, Clark remained a popular touring act as late as the 2000s.

Baseball legend Mickey Mantle, a longtime fan and friend of Clark's, requested that Clark perform “Yesterday, When I Was Young” at his funeral, a promise Clark kept when Mantle died in 1995.

Clark is survived by extensive family and his wife of 61 years, Barbara. Our thoughts go out to his family and friends.