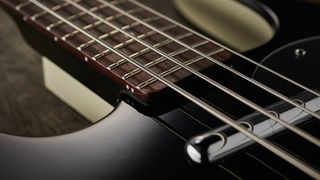 The bass guitar may, at least traditionally, have two fewer strings, but in our estimation the instrument deserves just as much time in the spotlight as the electric guitar. And, apparently, a group of Scottish scientists feels the same way.

The Herald Scotland reports that Dr. Jonathan Kemp of the University of St. Andrews’ School of Physics and Astronomy, along with the university’s Music Centre has developed “revolutionary strings using fresh construction techniques which take the instrument to places previous performers were unable to reach, in a tonal sense.”

As Dr. Kemp explained, “Normal bass strings can be played far up the neck. But the lowest pitch strings sound bad and are poor at harmonizing with higher notes.

“My new strings allow for improved tone when playing high up the neck of the instrument.”

For their work, the team employed a technique known as lumped construction, which Kemp said had previously been applied only to piano strings.

Dr. Kemp’s study, published in SN Applied Sciences, demonstrated that bass guitar strings are “inharmonic” when fretted high up the neck, and that producing thicker thicker allows for greater harmonic content as well as improved pitch.

There's no word on when the strings will be available, but if that sounds intriguing, you can learn more over at the Herald Scotland.