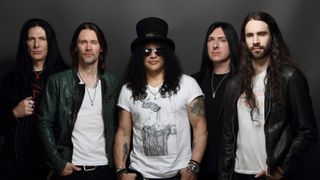 Slash featuring Myles Kennedy & the Conspirators have announced a new round of North American tour dates in support of their 2018 album, Living the Dream. The trek kicks off July 15 in San Francisco and wraps August 13 in Orlando, Florida.

Tickets are on sale Friday, February 8 at 10 A.M. local time. For more information or to purchase tickets, head over to SlashOnline.com.

Slash recently spoke with Guitar World about the gear he used to record Living the Dream, his third album with the Conspirators. Regarding his main guitars, he said:

“I used a ’54 [Gibson Les Paul] Goldtop on a bunch of songs. And then I used my ’58 Les Paul and also my [Kris] Derrig Les Paul [replica]. I also had a ’58 Reissue Tobacco Burst that I picked up from a dealer in London. And that was basically it. Then for the acoustic stuff I used my Martin D-28 that I bought new, back around the time of the Apocalyptic Love record.”

As for his amps, Slash continued, “I did pretty much the whole record, with the exception of one song, with a brand-new Marshall Jubilee 100 watt. And what’s funny is, I had found a couple people that had some original Jubilees from the Eighties, and I bought a bunch of them — probably six or seven — because you don’t see them around that often. Then on top of that I have my own Jubilees. But most of those are in the Guns N’ Roses rig. So Marshall actually gave me a brand-new one to use. And it sounded great. So I ended up using only that one and none of mine! [laughs] So that’s the amp on everything. The only song that’s different is “The Great Pretender” — for that one I used an old Fender combo, that belongs to a friend of mine, and combined that with one of my ’59s. They sounded really good together, and it was just so different from the setup for everything else.”