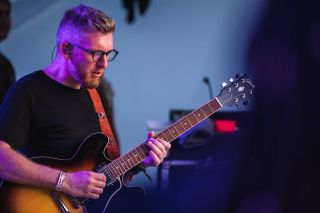 Steve Down on stage with Joss Stone.

Steve Down is a UK-based session guitarist who currently tours with powerhouse soul and R&B singer, Joss Stone. A member of Stone’s live band since 2012, Down also plays with Scottish singer-songwriter Sandi Thom, and has worked alongside Jeff Beck and a host of other top shelf artists.

Down recently embarked with Stone on her most audacious project to date — The Total World Tour — in which she attempts to perform in over 200 countries. As any gigging guitarists can attest, backline gear quality can vary greatly from venue to venue, so traveling with a dynamic and reliable modeling amplifier like the Profiler has been a saving grace for the guitarist.

Below, Down discusses life on the road with Joss Stone, his live rig, and more.

Visit kemper-amps.com for the latest on Kemper, and for more on Steve Down, head over to stevedownmusic.com.

Where are you located?

I live in Exeter, about three hours away from London. I prefer to stay in a less busy place. I have a studio in my house where I do most of my remote sessions, as well as teach guitar lessons. However, whenever a more advanced setup is needed, I can take a 30 minute trip to my friend (and Joss Stone engineer) Christian Sennett’s studio.

How did you land the gig in Joss Stone's band?

Joss's parents were based close by to Exeter. Joss's mother Wendy set up a music bar, Mama Stones, to provide live music almost every day. They would invite bigger acts, but also had a house band, which I joined. Joss was of course in and out that place, so we got to know each other.

One day she needed a guitarist to do some bits and pieces for a TV promotion for her Soul Sessions 2 album in 2012. After that I was asked to do a bigger show in Paris. Then they invited me to join her Total World Tour — and it has been going since 2014.

I believe there are 34 countries left, which we will hopefully cover by the end of 2019, before we go back to more traditional touring schedules! The Kemper has definitely helped with traveling to all these places, where you have no idea what the backline will be. I also played on Water For Your Soul where I used a mixture of the Kemper and my Princeton amp.

Speaking of your Kemper, when did you come across the Profiler?

I have had it on my radar for a few years. Christian was banging on me to get one for ages, so I gave in to him and bought a unit in 2016. It was after a tour where the backline was utterly terrible. We played a beautiful tiny country called Bhutan. They just couldn't get backline together, so I ended up with a beaten up Marshall MG50 — more of an amp you would see in a secondary school's practice room. That's when I decided to get a Kemper.

Since then it has been a lifesaver for so many times. You can just plug it into the house system and it will give you perfect results every single time. And obviously it has become so useful for studio stuff, too. I have had innumerous sessions here and in other studios where it has become invaluable. It saves so much time. Normally I played through a Fender Twin Reverb — and if that's not the sound [the artist] wanted, I was stuffed because that's all I had.

So, the Fender Twin has been your amp for many years?

Yeah, I really like the red knob version with the 2x12” speaker setup. I have always been into Fender-ish stuff and also used Princetons. I really like that kind of ‘60s sound. Then eventually, there was this amp company Rift Amps (riftamps.com) that made me a custom amp. It had this mid-sixties look and two channels. Two cleans, no dirt­: one channel being a Twin Reverb, the other being a Blackface. I worked with that amp for a while but obviously couldn't take it on tour with me. So I profiled it. Since then, to be honest, I have literally just used the Profiler.

Do you still use the Rift and Fender amps in the studio now?

Sometimes, but not really. There were even a couple of times where I fooled the producer.

One time I was booked to play with a group that had an Al Green kind of sound. I had a Höfner guitar and used a Fender Champ sound from the Kemper — I typically use the Tweed Pack by M.Britt profiles (mbrittprofiles.com) for this. So I told the producer, Christian Lohr, that I would do it with the Profiler. He said the result sounded too digital. He's such an analog guy and I knew he would be dead against it once he knew I was going down the digital path.  So I said “Fine, I'll use a Princeton.” Instead, I just tweaked a couple of parameters like the Tube Bias, Clarity and Definition, and sent the file back. He found it perfect. We laughed when I told him the truth later.

In short, most people are really happy with the sound of the Profiler, just like another producer I worked with, Lack of Afro, who is really into vintage analog sound.

Sometimes your eyes seem to fool you.

Yeah. If you know what you are hearing, you are more likely to say “No,” if, for whatever reason, you do not like digital sound. But if you do the blindfold test, you can easily be fooled. There are lots of examples online proving this.

What Profiles do you typically use?

For my work with Joss, I use my custom amp profiles and the M-Britt selection. I also enjoy the Fender Twin profile that comes with the Profiler. Then there is a Cornford Carrera profile that I use for jazz sessions, which is from the Kemper community. If I need a dirty channel I will use my Fulltone Fulldrive which was the result of some testing. I use a Bogner Ecstasy profile for the heavier stuff in Joss's band.

So your sound selection is not that big.

It's not. A lot of Joss's songs need a vintage clean tone that slightly breaks up. That's her sound. And I mainly play a Gibson ES-335. But there are a few songs that need quite a lot of heavy effects added to my basic sound. I have used the Crystal Delay a couple of times, for example in “Jetlag,” to create a really wide sound for the guitar. The stereo delays and modulation effects in the Profiler are brilliant. It really brings the sound you would create in a studio, out on to the road. Putting that in my sound has massively impressed me. There are three or four songs in the set where I need that. Also, the Wide Stereo EQ has been really useful for me.

Do you use any other external effects besides that Fulldrive?

Not at all. I went straight for the Profiler Remote and it works really well. In addition, I use a Dunlop expression pedal that is hooked up to the remote, and it handles all the volume and wah effects.

What is the exact stage routing?

The Profiler serves FOH in stereo. I use in-ears for monitoring. However, Joss also likes a little bit of guitar sound from the monitors. And I agree that a little bit of rumble on stage is quite nice. When there is a chance to use a flat EQ speaker or a cabinet of my choice, I'll use that, since I own the powered version of the Profiler. All options covered, just in case.

Do you tweak your Profiles in order to match the guitars you use?

Yes, my two main guitars are a Nash Telecaster and a Gibson ES-335, which is a lot hotter. So when I switch guitars, I'll also change the Profile. This is really useful because I don't have to go the unit to adjust it. The changes are mostly gain-related to level out what goes to the FOH. I also tweak the clarity and definition, and obviously the EQ.

It seems to make tour managers’ lives a lot easier when organizing backline. The Profiler is so small, it goes into hand luggage, and so I'll arrive with all my sounds. For me, the guarantee that I can get the same tone each time is great. And I usually also go through all the profiles with the FOH technician before a tour so that he can have specific presets ready that match these sounds. It also makes his life easier. So, the Profiler really bridges the gap between the musician and the technician. Actually, I think it enabled guitarists and engineers to be friends again!

Is there typical signal flow in your profiles?

I do use a little bit of noise gate. For a few songs I have a compressor going to level my sound to not pop out the mix too much. In other situations I would take that out to achieve a more vintage sound. I also use the tremolo and rotary sounds in the Profiler, a little chorus, as well as the delays and the stereo wide EQ. Those options are usually all available in my programs as options on the remote in case I need them.

If I need a slight boost, I turn on my Fulldrive pedal. Sometimes I also use the boost within the Profiler. But in other cases, such as “I Put a Spell on You,” where the guitar is quite prominent with a humongous sound, I'll switch to a different profile with more gain and a bigger sound.

How does the Profiler translate your style of playing?

It does a brilliant job. It just responds to all of the dynamics that come from my fingers or when rolling the volume knob — just like a normal amplifier and just as I would expect it. I haven't struggled with it at all. Even when I first got the Profiler, it didn't take me very long to get used to it. At first, I used the profiles that were on the unit before I made my own.

No one has noticed a loss of quality. Actually, a lot of people actually prefer my new setup and I myself even find the clarity to be better in many cases. This is especially true when I put my acoustic guitar through the Profiler. I have specific profiles to cover that, which treat the signal almost like a DI, but add stereo effects to it.

Is there anything you would change about the Profiler?

I have had no issues with the Profiler at all, except for one thing: a few times the Remote wouldn't switch on. We sourced that to be a power issue in certain environments with fluctuating power supplies.

Other than that, I have two wishes. I would appreciate to have a little bit of additional gain at hand when using the Profiler with acoustic guitars, where I can turn the amp- and cabinet-simulation off. It could also be a specific acoustic setting. Another thing that might be great would be the possibility to download settings for the different effects. Being able to get a bigger choice of stomps would also be nice.