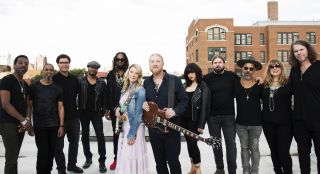 Recorded in Tedeschi and Trucks' backyard studio, and featuring contributions from the likes of Warren Haynes, Oliver Wood, Doyle Bramhall II and Marc Quiñones, Signs is set for a February 15 release via Fantasy/Concord. It was produced and engineered by Derek Trucks with Jim Scott (The Rolling Stones, Tom Petty.)

You can check out the album's lead single, "Hard Case," below.

“This is the first record we’ve made where, when I listen to it, it puts me in a specific place,” Trucks said of the album in a press release. “It puts me in a zone and hits some raw nerves.”

Signs was recorded during a tumultuous time for the band, as they dealt with the loss of family members and friends including Trucks' uncle—Allman Brothers alumnus Butch Trucks—Gregg Allman and mentor Leon Russell. The band also grappled with America's increasingly fractured political landscape during the album's creation. However, the band was determined not to let these events drag the album down.

“We are very lucky to do what we do, and we take responsibility for creating something positive to counter all the negativity,” Tedeschi said. “We all have to deal with tragic circumstances at times. As a musician, I feel it’s my job to go out there, kick ass the best I can and offer inspiration.”

You can check out the album artwork and track list for Signs below. To preorder the album, point your browser in this here direction.

I’m Gonna Be There

When Will I Begin

Walk Through This Life