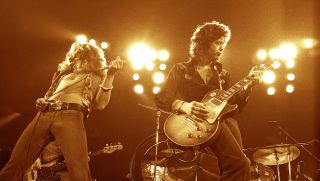 After a years-long legal battle regarding whether Led Zeppelin plagiarized the 1968 Spirit instrumental Taurus for their own Stairway to Heaven – centered specifically around the descending Am chord sequence at the beginning of the latter tune – the case continues to wind on down the road.

On September 23, a group of 11 judges convened at the 9th US Circuit Court of Appeals in San Francisco to determine whether a new trial would be required.

The original 2016 case saw a trustee representing the estate of late Spirit guitarist and songwriter Randy Wolfe (a k a Randy California) accuse Led Zeppelin of lifting a piece of Taurus for the intro to their own 1971 song.

That case was ruled in favor of Zeppelin, though two years later a 9th Circuit panel ordered a new trial after finding errors in the jury instruction process at the first trial.

While a previous judge’s ruling stated that copyrights of musical compositions prior to 1972 are only protected as sheet music, on September 23 plaintiffs' attorney Francis Malofiy argued that the copyrighted musical composition of Taurus should also include the song as it was recorded, rather than just transcribed on paper.

According to a Fox News report, several judges expressed skepticism toward Malofiy’s argument.

"You've got to get your sound recording in to win, don't you?" Judge Andrew D. Hurwitz said. "You lose the case unless you do. A hundred times out of a hundred."

The plaintiffs’ attorney went on to further argue for the inclusion of the sound recording by stating that Page, who composed Stairway to Heaven, does not even read sheet music.

As for why he has pursued this case so tenaciously, Malofiy explained to Variety, “When it comes to music, there has to be artistic and intellectual honesty. You can’t deny how great [Led Zeppelin] are as musicians. The issue that is going to haunt their legacy, however, is that they fail to give proper and necessary credit.

“That’s the black cloud hanging over their… what… blimp?”