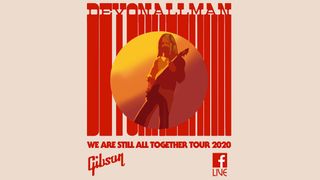 As the world socially isolates to help combat the spread of COVID-19, all tours and concerts have been canceled for the foreseeable future, right?

Devon Allman, co-leader of the Allman Betts Band and son of Gregg Allman, has announced that he will be going on tour – from his house.

The shows will be broadcast live on the singer and electric guitar player’s official Facebook page, with Allman changing up the theme of each “gig” to keep things unique.

Showtimes will be Wednesday and Friday at 7 PM CST and Sunday at 4 PM CST. According to a statement on Allman’s Facebook page, “Each week Team DA will post a graphic across all Devon Allman and Allman Betts Band websites listing the upcoming performances and what the theme for each gig will be.

“With most artists hopping on at random times, Devon wants to have a schedule with shows fans can look forward to and interact as well. The shows will be live on the Devon Allman Facebook Page and then reposted the next day to all platforms like YouTube, Instagram, etc.”

Additionally, Gibson and Earthworks Audio will supply musical gear to be used as giveaways over the course of the performances.

Furthermore, there will be a virtual tip jar in place for donations, with proceeds going to the Allman Betts Band touring crew to help during the time from touring.