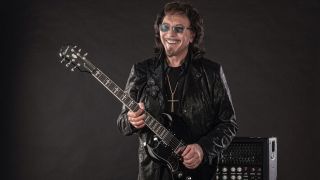 Tony Iommi is auctioning off a signed Epiphone SG electric guitar and a host of autographed Black Sabbath-related goodies to support the Heartlands hospital charity in his hometown of Birmingham, England.

Iommi has undergone cancer treatments at Heartlands in the past.

The Epiphone SG resides in Iommi's home studio, and the guitarist uses it to write new music. As per all Iommi’s instruments, it’s a left-handed model, but as he explained to the Birmingham Mail, if the winning bidder prefers a righty guitar, he has that too – and that one comes with the extra pedigree of having been played by Queen’s Brian May.

“I also have a spare right-handed guitar I keep handy for when friends drop in and want to jam,” he said. “If Brian May calls 'round, I keep it handy so we can play together. I’ll put that one up if it’s more to the winning bidder’s taste.”

Additionally, the SG comes with a case, picks, a pack of Iommi’s personal strings, a letter of authenticity and photo of Iommi with the guitar.

Other autographed items include Black Sabbath CDs, vinyl albums and box sets. Winning bids include free shipping, and all proceeds go direct to the hospital charity.

As for what Iommi has been doing during his coronavirus self-quarantine?

“I’ve washed the car, cleaned the garage out, done all those little jobs that you realize needed doing, just like everyone else,” he told the Mail.

“Maria and I have been binge-watching TV, too – we’ve been doing Ozark and Boardwalk Empire – and I’ve been playing guitar.

“It’s a bit like being on tour, without getting out to play. You’re stuck in the room each night.”

You can bid on the guitar and other swag on the hospital charity’s eBay page.