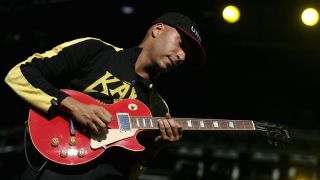 Despite his arsenal of oddball electric guitars, Tom Morello’s Rage Against the Machine career tends to be linked with two main instruments: his Arm the Homeless Frankenstein creation and ‘Sendero Luminoso’ Fender Telecaster.

The latter is the guitar responsible for the RATM debut’s drop-D juggernauts, including the band’s landmark single Killing in the Name. But, as it turns out, it wasn’t the only guitar used on that particular track.

In a recent Instagram post, Tom Morello let fans into the history of his relationship with the Gibson Les Paul, which dates right back to the very first Rage Against the Machine demo.

“In the studio with this old friend yesterday,” Morello commented. “Bought this guitar in 1992 from West LA Music. After borrowing an engineer’s Les Paul to do overdubs on the Bullet In The Head demo I decided I needed my own Les Paul.

“Why did I choose this one? Because it was the color of Taco Bell hot sauce, a staple food group of mine at the time. It became my principal overdub guitar and is heard on Killing In The Name, Freedom, Township Rebellion and many others, backing up my Tele. Still sounds great.”

So, for anyone wondering how Morello’s riffs sound quite so thick on that album, there’s your answer. As many engineers and producers will attest, combining single coils and humbuckers always yields good results.

Eagle-eyed Morello fans will note that the ‘Del Taco’ Les Paul Standard, as Morello has dubbed this particular guitar in the past (brand loyalty be damned), was used live during Audioslave’s 2005 tour to perform a number of Soundgarden tracks, including Spoonman and Loud Love.

The guitarist’s most famous Les Paul is the ‘Budweiser’ LP, which had its promotional beer branding burned off by Morello in a parking lot. It became his main guitar on Audioslave’s final album, Revelations.