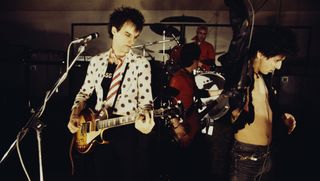 Guitarist and punk legend Walter Lure, best known for his stint with Johnny Thunders and the Heartbreakers, has died at the age of 71.

The news was confirmed in a Facebook post from Los Angeles club the Starwood: "Walter Lure (April 22, 1949 - August 22, 2020) our dear friend has passed away. Walter was diagnosed with liver and lung cancer in July 2020, which spread rapidly and he died from complications related to the cancer at the age of 71, peacefully in the hospital, surrounded by family.

"He was much loved by all and respected for all he contributed to the world of music. He will be dearly missed. To his family, friends and fans our deepest condolences. May he RIP."

The Heartbreakers were formed by singer and guitarist Johnny Thunders and drummer Jerry Nolan out of the ashes of the New York Dolls. The two teamed up with former Television bassist Richard Hell, and after one gig added Lure, formerly of the Demons, on guitar and vocals. His first show with the Heartbreakers was on July 4, 1975 at CBGB.

“On Friday night I played my last Demons gig at two in the morning with about 20 people in the audience sleeping or nodding out,” he recalled in an interview with Collide.

“The next night was my first Heartbreakers show and the place was filled to the walls. It was sold out, you couldn’t even get in. There were lines around the block. I’d never played a gig where I’d had that kind of rabid crowd before. So right away I’ve gone from being nowhere to being in one of the biggest bands in New York City. Chris Stein from Blondie used to call me ‘the rookie of the year’ because I came from nowhere and wound up on top of the world.”

The Heartbreakers were a must-see live act on the New York City punk scene even as they battled intense drug addictions and remained unable to land a record deal. In 1976 they scored a slot on the Sex Pistols’ UK Anarchy tour alongside the Clash and the Damned, just as punk was taking shape in England.

“The whole scene was madness,” Lure told Louder. “Kids with safety pins and colored hair, which reminded me of the Dolls. Johnny Rotten was trying to be a nasty little prick on tour, to establish his persona as a scumbag. He was a great guy when we’d be hanging out in hotel bars, but as soon as somebody came in from outside, his whole personality would change.”

By this time, Hell had left the band to form Richard Hell and the Voidoids, having been replaced by Billy Rath. It was this lineup that finally scored a record deal with Track and released the landmark L.A.M.F. in 1977. The record featured now punk rock mainstays like Born to Lose, the Dee Dee Ramone co-write Chinese Rocks and It’s Not Enough.

Regarding his guitar sound, Lure told Louder Than War, “I used the same Les Paul Deluxe on all of the L.A.M.F. recordings and I still use it today. I got used to it but now when I tour in other countries and states I usually ask the promoter to borrow one for me as I hate bringing it on planes.

“And amps? We usually used either Fender Twins (or Pros in the smaller clubs) or Marshalls. Johnny and I liked Fenders for the reverb but also Marshalls for the bottom-end and distortion. When we toured in the U.K. we often used a Fender Twin and a Marshall in tandem for a much brighter, heavier sound."

L.A.M.F. would be the Heartbreakers' only full-length release. They broke up soon after, though they reformed for occasional shows until Thunders’ death in 1991.

Lure also worked with the Ramones on their Subterranean Jungle and Too Tough to Die albums, and led his own band, the Waldos.

At the same time, he established a career away from rock ‘n’ roll as a Wall Street stockbroker, even as he continued to perform sporadic dates.

Earlier this year, Lure published his memoir To Hell And Back: My Life In Johnny Thunders’ Heartbreakers, In The Words Of The Last Man Standing.