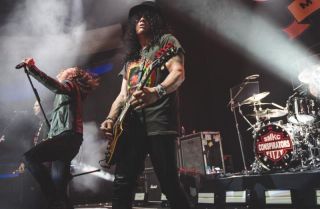 Slash Featuring Myles Kennedy and the Conspirators were joined onstage at the Hollywood Palladium on October 16 by Guns N’ Roses bassist Duff McKagan, for a performance of the Gn’R classic, “It’s So Easy.” You can check out fan-filmed footage of the rendition above.

The Palladium show was the final date on the Conspirators' 2018 U.S. tour. The band, which in addition to Slash and singer Myles Kennedy includes bassist Todd Kerns, drummer Brent Fitz and rhythm guitarist Frank Sidoris, will head to Europe in February, 2019. Tour dates can be found here.

The 'Universal Monsters' Maze pays homage to iconic classic monsters by underscoring each of their unique attributes and reimagining them into terrifying modern-day characters. The Wolf Man, the Invisible Man, the Phantom of the Opera, Dracula, Dracula’s Bride, Frankenstein’s Monster, the Bride of Frankenstein and the Mummy are among those featured. Tickets for “Halloween Horror Nights” can be purchased here.

Said Slash: “As a fan of horror movies and of ‘Halloween Horror Nights,’ I jumped at the chance to once again collaborate with Universal Studios Hollywood to produce a soundtrack for the maze. Similar to the way music affects a film, I wanted to compose a score for the legions of infamous characters featured in the maze to elicit a greater sense of terror. In the end, the goal was to ultimately make the guests feel as if they are playing an integral role in a classic Monster movie.”

Check out the cover and track list, with song descriptions, for Slash’s Universal Monsters Maze Music below:

1)     “We Belong Dead” - inspired by Frankenstein Monster’s immortal line from the explosive finale of The Bride of Frankenstein.

2)     “The Danse of the Dead” – inspired by “Danse Macabre,” the late medieval art movement that celebrated “the universality of death” and influenced the famous masquerade ball scene from The Phantom of the Opera.

3)     “The Final Scare” – this guitar-driven, up-tempo track combines punk with modern electronic where multiple monsters attack in the maze.

4)     “Universal Monsters Rising” – Slash's lead guitar joins with the mournful sound of a tolling church and the sharp, staccato stabs of violins to call guests to the graveyard, where Universal Monsters rise again.

5)     “The Collection Room/Dracula’s Lair” – composed to accompany the Mummy and Dracula sections of the maze, this track transitions between Middle Eastern and Eastern European instrumentation to bring to life these two classic monsters.