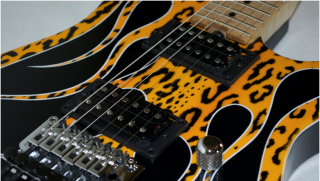 As the Camp Fire continues to rage in northern California, it has been reported that among the victims who lost homes to the blaze is famed guitar builder Wayne Charvel.

One of the most celebrated guitar builders of the past 40 years, Charvel helped to usher in the Eighties “superstrat” era by producing guitars and selling parts and aftermarket modifications for the likes of Eddie Van Halen, Randy Rhoads, former Ratt guitarist Warren DeMartini, former Ozzy Osbourne guitarist Jake E. Lee and Bon Jovi’s Richie Sambora, among many others.

“Eddie came by the shop a lot and sometimes would sit on the floor and play the guitar while we repaired some of his other guitars,” Charvel recalled to Guitar World in 2010. “One day, Eddie came over to the shop and asked if I had an extra body and neck. I told him that I had an extra Boogie Body neck and an old body in my shop. I gave Ed the parts, and the next time I saw the guitar he had used a spray can to paint it white with black stripes. He used nails to hold the pickup in the body.”

Charvel’s current home and workshop was located in Paradise, California, and it was destroyed along with the home of his son, Michael, and other family members who lived in the area. Michael spoke to Popular Mechanics, recalling:

"After we evacuated, my brother-in-law, the fire chief, checked on all of our places including our workshop. He said, ‘I’m sorry to tell you guys but there’s nothing here anymore.’

“Gone. My dad’s got years and years making the templates and the jigs and all the tooling and the custom bits and in less than a couple hours, everything was destroyed. He’s been building guitars since 1959. A lifetime of work is destroyed in a couple hours.”

Michael went on to say: “Any guitar we have that we were working on before the fire will get finished. Just I don’t know when it’s going to be. We’ll just have to start over and get those people’s guitars for them. I feel bad because I can’t respond to people as quickly as I want to mainly because the internet is hit or miss. I’m trying to tell people, thank you, we love you all. We’re trying to get back to you in a reasonable time.

“I’ve got a steady place for the five or six days and after that who knows where I’m going to be. The good news is we’re all alive and we’re healthy. We’re just lucky that we’re here. I thought I wasn’t going to make it out. We just gotta keep moving forward and eventually we’ll be back up and running. “

The Charvel family has set up a GoFundMe page to help with expenses in their time of need. To donate, please head here.