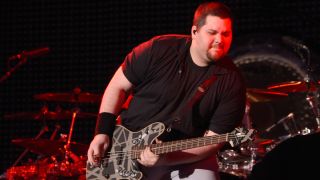 Wolfgang Van Halen – yes, son of Eddie, but you already knew that – has been working on a solo album, and boy, has it been a long time coming. But, from what we’ve heard so far, it sounds very promising indeed.

So, it’s understandable that young Wolfie would get pretty annoyed if an online troll said all the record would amount to is “a revised version of Eruption on bass”. WVH’s response? To record a clip of him playing exactly that.

Van Halen picks up his EVH namesake bass guitar to run through the track’s trademark tapping section (albeit in a different key), accompanied by the caption: “So here it is, I guess. My entire album. 35 seconds of Eruption on bass. Stay tuned for album number 2 where I play 35 seconds of Spanish Fly on bass and nothing else.”

And for good measure, he adds: “FUN FACT: I was not wearing pants when I recorded this.”

So here it is, I guess. My entire album. 35 seconds of Eruption on bass. Stay tuned for album number 2 where I play 35 seconds of Spanish Fly on bass and nothing else. pic.twitter.com/AHyBv2AC5XAugust 24, 2020

Welp, the secret’s out. I am pleased to announce that my entire album is just a revised version of Eruption on bass. pic.twitter.com/F1M98n0lf9August 24, 2020

WVH plays all instruments and sings on the forthcoming record, which is produced by Alter Bridge and Tremonti collaborator Michael “Elvis” Baskette.

Earlier this year, Wolfgang signed a deal with Explorer1 MusicGroup, so we’re hoping to at least hear a full track before the year is out…