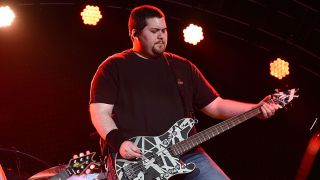 Van Halen and Tremonti bassist - and son of Eddie - Wolfgang Van Halen has been hard at work on his debut solo album for a good five years or so now, and this week, he released a new clip that demonstrates his formidable bass skills.

In a video posted to Twitter, simply captioned “Bass & Drums #WVHAlbum”, Wolfgang delivers some rapid-fire pick bass, along with furious runs, over a slow-build drum beat. It sounds pretty damn promising to our ears.

The record was finished this time two years ago, according to the producer, although the coronavirus pandemic significantly set back plans for the album’s release.

Proud father Eddie has described the music as “"like AC/DC meets Van Halen meets aggressive pop. The riffs are catchy. It’s a little of everything and sounds like a freight train coming at you. I’ve never heard anything quite like it. It’s so powerful that I’m jealous.”

Earlier this year, the 29-year-old inked a deal with Explorer1 MusicGroup - so hopefully we don’t have too long to wait.

We’re less likely, however, to see anything from Van Halen any time soon, with flamboyant frontman David Lee Roth labelling the iconic hard-rock outfit “finished” at the end of 2019.