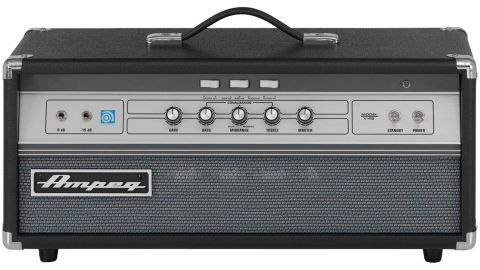 Ampeg’s SVT may be the gold standard for high-powered tube heads, but the V-4B is a worthy counterpart for those who don’t need gobs of clean headroom.

After its debut in 1969, the 300-watt Ampeg SVT (Super Vacuum Tube) quickly became a gold standard for high-powered stage gear. Originally marketed as a multi-purpose amplifier for guitar, bass, and anything else that needed a tremendous amount of volume, the SVT was especially attractive to bassists, as lower frequencies require considerably more power to amplify than high frequencies.

By 1974, Ampeg turned its focus on bass players for the SVT, and the rest is history. Flying somewhat below the radar, the original Ampev V-4B was released in 1971 and featured the same preamp as the SVT, but with a 100- watt power amp. While the SVT has maintained its position as the one of the all-time stage amps—especially for the rock set— the V-4B has nonetheless earned a smaller, yet devoted following of players and collectors. With its period-appropriate looks, all-tube construction, and matching 1x12, 2x12, and 8x10 cabinets Ampeg’s reissue V-4B is sure to make some heads spin.

If there is a single contributing factor limiting the appeal of an amp as celebrated as the SVT, it is certainly its weight; at 80+ pounds, the SVT is a beast to haul. Taking the preamp guts of the SVT and packing it into a 100-watt, 41-pound package, the V-4B is certainly appealing on paper. But is there any “there” there? Plugged into the matching SVT-212AV cabinet, the V-4B promptly and proudly pumps out the kind of round sound Ampeg has built its brand upon.

The V-4B’s tone controls are straightforward, with three bands of EQ with switchable mids and ultra lo and ultra hi switches. By riding the gain and volume controls, there’s actually a considerable range of tones at the fingertips, from creamy and beefy to honky and ornery.

Some would say a tube amp sounds best when cranked. Crank an SVT to the max, and you’ll soon be bleeding out your earholes. Not so with the V-4B. On a few loud rock rehearsals—with gain and volume set just past noon, the V-4B easily and willingly doles out the kind of creamy overdrive the best stompboxes can only approximate.

The beauty of an amp like the V-4B lies in the dynamics; whereas the best solid-state amps are transparent and unwavering, there’s an element of danger in the V-4B. Push it hard, and it’ll howl. But pull back, and it cleans up quite nicely. I found there to be a bit of a learning curve with the V-4B; as I climbed in volume, the tone controls seemed to increase in sensitivity, and what were once subtle frequency bumps at moderate volume suddenly became extreme.

Simply put, Ampeg’s V-4B is a blast to play. With its old-school vibe, dynamic performance, and massive fun factor, the once-niche V-4B cult is bound to get a big ol’ bump in 2014.