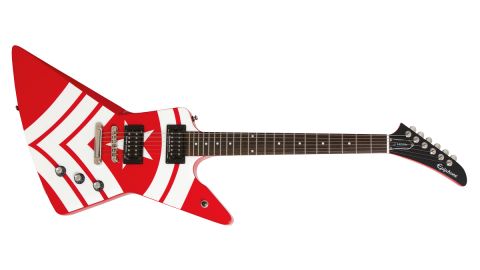 One of the most-playable Explorer types ever made, Jason Hook's signature electric lands a knock-out punch.

Having earned his stripes in Alice Cooper and Vince Neil’s bands before joining Five Finger Death Punch in 2009 - one of the fastest-rising heavy acts of the 2000s - Jason Hook is undoubtedly one of metal’s modern masters.

More recently, the Canadian was tapped by Epiphone to design a more affordable version of his 2013 Gibson M-4 Sherman signature guitar. Much like the band he plays in, the custom racer-style red and white finish won’t be to everyone’s tastes, though the overall quality and affordability do more than enough to compensate.

In fact, it’s the kind of instrument that would make an ideal project guitar to strip down and/or repaint purely because of how much you get in return for spending so little. The pickups are exactly the same as its limited-run Gibson equivalent, the classic pairing of a Seymour Duncan SH-1 in the neck and SH-4 in the bridge offering plenty of bark through higher gain channels settings without sacrificing any of the harmonic richness when voiced clean.

Equally impressive is how loud the guitar resonates in your hands - just like you’d hope from any Explorer, it really does feel like you can hear all the extra mahogany, whether unplugged or overdriven to ooze endless sustain.

That said, it’s an instrument that doesn’t feel unreasonably bulky or heavy. The deeper upper body cutaway and angled scarf could actually make this one of the most playable Explorer-type guitars ever made, ideal for riffers and shredders alike.

Thanks to the Grover Locking mini-Rotomatics machine heads and Locktone bridge and tailpiece, this is also a machine that feels remarkably dependable - a trusty workhorse players can really dig into without having to worry about tuning slippage.

As is often the case with the best artist signatures, you don’t necessarily have to be a fan of the player or indeed any associated bands to get the most out of said instrument.

The sheer quality of the design and construction makes Hook’s Epiphone debut a worthy consideration for anyone on the lookout for an inexpensive Explorer that can comfortably handle it all, taking you from screaming metal intensities to more subtle variations of jazz, rock and blues. It’s hard to see where anyone could go wrong here.

Check out our story in the Epiphone Jason Hook M-4 Explorer's release.