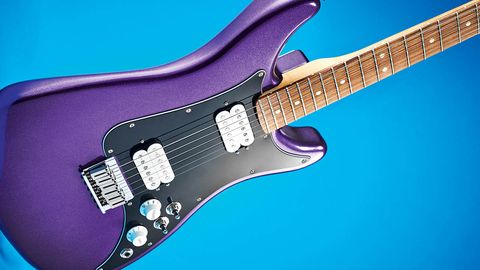 The Fender Lead III has a little Strat DNA, but with its more compact body and clever switching options, it's a formidable and playable tone machine in its own right.

Guitars are discontinued for all kinds of reasons – some simply don’t connect with enough players and for others it just isn’t their time...

Reissues can give lost gems a second life - a chance to find the fanbase that eluded them first time around. Which brings us here for the encore of the Fender Lead. It wasn’t exactly a flash in the pan design originally, though.

Produced between 1979 and 1982, the Lead eventually encompassed three guises in its original lifetime; the single humbucker Lead I with series/parallel switch, the Lead II with two single-coils and a phase switch and finally, the double humbucker Lead III that surfaced in 1982 with coil selector switch.

Bono picked up a Lead II in U2’s earlier days; Clapton’s is sitting in London’s Hard Rock Cafe. Even St Vincent has a heavily modded model. Even so, the Lead is not exactly a ubiquitous cult model. Switching configurations aside, it’s tempting to dismiss the Lead as a budget Strat alternative that gave way to the advent of the Japanese Squier series in 1982.

But spending time with one reveals a distinct shape that holds its own. It is a Strat alternative that players might actually prefer.

The Lead II and III are returning but the I has been left out of the reunion. While not being badged as a strict ‘reissue’, the two Leads for 2020 do stay authentic to some degree. They’re now part of Fender’s ever-growing Mexican series pickups and tuners, plus the modern C neck profile.

The Lead III potentially offers the widest tonal options of the two new models, and whadoyaknow, that’s what we have here, in the Purple Metallic finish Fender is the keenest to showcase of the selection.

The six-saddle, string-through-body hard-tail bridge is a tidy piece of hardware.

The Lead III is kitted out with '70s vintage-style machine heads with F stamp tuners.

The 25.5-inch scale may be the same as a Strat but the narrower, more double-cut body makes the Lead III look and feel more compact. According to your own preferences, that could win you round if you’ve never taken to Leo’s original or immediately turn you off. But make no mistake, it's distinct in the Fender catalogue.

We like it a lot and the guitar feels close and personal sitting down, with a balance on the strap, too. We like that metallic finish; it’s certainly won a fair few fans in the TG office and works very well with the black/white-edged pickguard.

Though CITES changes suggest rosewood will be working its way to more models this year, the Player series is sticking with pau ferro for now. It’s undeniably a lighter alternative, but there’s not much in it in terms of feel.

This is one of the most playable examples of the modern C neck we’ve encountered – the action is low and fast. People talk about the speed of flat profiles from the likes of Ibanez, but a well-set-up Fender C is an addictive thing indeed.

John Mayer claims the slack in the strings is the key to a great guitar, and there’s a sense of easier wins for your bends and vibrato offered with the elasticity here that we love. The large heel block is definitely from the older school, but the acoustic experience here bodes well for plugging in.

Fender has some weird and wonderful models away from the accepted classics. The late 60s single pickup Swinger [an original pictured above] being the most recent revival with a Japanese-only reissue.

Before that, the wonderfully odd offset Meteora got a second chance with a 2018 Parallel Universe model followed by last year’s more affordable HH model.

The semi-hollow Starcaster revival is now on a victory lap – the recent Squier models were reviewed in TG327. Even the V-shape-gone-awry mid-80s Katana got a Prestige model in 2016. But there’s plenty more Fender gold to be mined in them hills – the Performer must be due a reappraisal soon!

The thin alder bodies of Fenders with this scale length are typically bright sounding guitars and that in turn leads to a lively tonality when humbuckers are brought into play. That’s here in spades from these Alnico IIs– a crisper crunch along with some welcome versatility.

A caveat worth remembering is that despite the ‘best of both worlds’ concept, coil-splits aren’t the same as the full-fat single-coil experience. The level drops a little when you split here, but so does the bottom end.

What you gain is three more single-coil-esque flavours – we especially like the mid position split here, a great balance of throaty punch that recalls the middle territory of a Strat that’s also great for strumming with the volume wound down a notch.

This is an interesting mix of the distinct with Strat traits; the familiar and the fresh all from an unlikely comeback. The Lead III really must be tried out to see what it off ers in feel and tone, but we think it feels good and plays great. Rather than badge this as worthy addition to a guitar arsenal, we think it holds its own as a potential main squeeze to cover your needs.

If it really must be a Strat, why not throw another pickup (an alnico 5 single-coil) and a two-point trem into the mix?

With a coil-split on the 85/15 ’buckers, this is a close rival for price too, so it all comes down to whether you like the PRS Wide Thin neck profile.

If we’re talking versatility, it’s hard to ignore our guitar of 2019 – classy build with five positions including coil-splits and some wonderful tones.