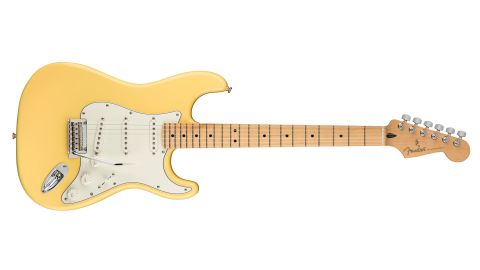 This is a great place to start for those who want an authentic, yet upgraded Stratocaster.

For decades now, the entry point to the Fender brand was the Standard line made in Mexico. These have been very reliable instruments that give you the essence of the Fender experience.

But Fender has decided that it’s time to change the way it does things at the entry point to the brand: the Standard is no more, simultaneously upgraded to and replaced by the new Player Series, which addresses some of the things that the Standard Series did in a certain way that gave Fender room to upgrade you later on to a higher series.

That includes things like pickup magnets, neck feel and bridge type. And on top of all that, they’ve revamped the colour offerings of the line. So essentially, Fender has discontinued the Standard, made a better guitar line a for few hundred bucks more, and called it the Player. The line includes six Stratocasters (SSS, HSS, HSH, SSS Plus Top, HSS Plus Top and HSS Floyd Rose), two Telecasters (SS and HH), an HH Jazzmaster and an HS Jaguar.

There’s also a lefty SSS Strat and SS Tele. Bass players are catered to as well with four- and five‑string Jazz Basses, a fretless Jazz, a Precision Bass, Jaguar Bass, and lefty P-Bass and Jazz Bass.

For this review, we’re focusing on the most Stratocaster-y of the Player Stratocaster – the triple‑single-coil model with a maple fretboard. The guitar comes in a suite of great colours – Three‑Colour Sunburst, Black, Buttercream, Polar White, Sage Green Metallic, Sonic Red and Tidepool – and depending on the finish you choose, you’ll get either a maple or a Pau Ferro fretboard, with the exception of Black, Three-Colour Sunburst and Polar White options, where you have your choice of both fretboard woods.

The body is made of alder (two or three pieces – you can’t expect a single solid piece of wood at this price) with a gloss polyester finish. The neck has a satin urethane finish on the back and a gloss urethane finish on the front, giving you that crisp Strat fingerboard look without the sticky neck. The fingerboard radius is 9.5 inches, flatter than a traditional Strat’s 7.25 inches but not as flat as the 12‑inch or compound radius boards you’ll find on some models higher up in the chain. The neck shape is a very comfortable Modern C shape, and there are 22 frets. The nut is made of synthetic bone, and seems very well finished.

Another nice touch is the ‘F’ stamped neck plate. It may be a simple thing, but having that iconic Fender ‘F’ on the neck plate instead of nothing feels like that extra little bit of effort that elevates this guitar above its Standard ancestor.

The pickups are a trio of single coils in the classic Stratocaster vein, but they’re totally redesigned from those that used to be featured in the Standard. Whereas those pickups used cheaper ceramic magnets and had a bit of a harsher high end, the new redesigned pickups use Alnico 5 magnets for a much more traditional Strat sound. If you’ve ever wondered why your Standard Strat sounded a little more brash and hairy than your buddy’s Deluxe, those ceramic magnets are why.

The first thing you’ll notice when you pick this baby up is just how comfortable that neck is. The Fender Modern C shape is a great ‘comfortable for everyone’ neck, in that there are probably other neck shapes more perfectly suited to any one individual’s hand, but this one is going to feel very playable by pretty much all players.

Hit a note and you’ll feel that familiar Stratty ‘spring’ – the lively snap that tells you you’re playing a bolt-on with a maple fingerboard. It feels more like an American Strat than the old Standard ever did.

Plug it in and you’ll instantly hear it: that classic Fender tone. These pickups aren’t quite on the level of Fender USA pickups, but they’re definitely much more faithful to what we expect of a Strat than what was in the Standard. The neck pickup has that SRV‑ish, full-bodied-yet-grainy feel; the bridge pickup has a nice bite without being overly harsh; and the middle pickup is the unsung hero, combining singing harmonics and a nice full body.

The middle pickup sounds especially great for playing without a pick, Mark Knopfler-style. One interesting quirk is that the first tone control covers both the neck and middle pickups, with the second control operating on the bridge pickup– traditionally left without a tone control at all in conventional Strat setups. This is a popular mod, and it’s not the first time it’s been seen on a Strat from the factory, but it represents a pretty big leap by being used in the Stratocaster entry point.

This is a great place to start for those who want an authentic, yet upgraded Stratocaster. It’s reliable enough to be your main guitar, and even if you want to upgrade the pickups in the future to something more high-class, you’re already starting with a heck of a guitar.