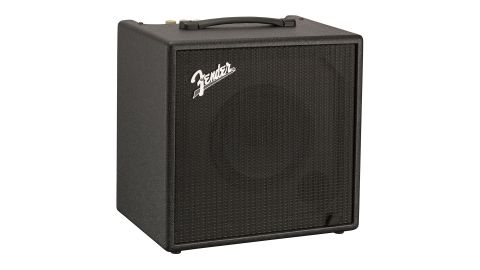 With the LT25, Fender has used its platform as innovators to build an amp that wants you to join the innovation.

The Rumble LT25 follows on from the LT Stage and Studio amps. In other words, it’s full of presets and effects, it’s designed to do a whole bunch of stufff, and it’s intentionally simple to operate. It’s also small and light – deceptively so, for an amp capable of holding its own in a garage jam alongside drums and guitars.

The Rumble LT25 is a 25-watt combo amplifier with 15 amp types including models of Fender classics, other modern bass amps and preamps. It has a standard EQ just like any bass amp, with bass, middle and treble controls alongside gain and master knobs. There are 50 presets, 30 of which are built-in and 20 of which are an ‘easter egg’ built into the menu system.

You have your choice of amps; 20 different effects divided into Stomp, Mod, EQ and Delay categories; and tap tempo for setting the pace of time-based effects. The effects include distortion, overdrive, compression, EQ, touch wah, modulation, reverb, delay and octave variations. A 1.8-inch colour display and an encoder knob give you access to various levels of editing control, and it doubles as a tuner display too.

There’s an auxiliary input so you can play along with your favourite tracks, which is pretty standard for this type of amp these days. There’s a footswitch jack for recalling your favourite presets, and it’s constructed using a solid wood cabinet – no plywood here – for really robust sound projection and frequency response.

There’s an eight-inch speaker and a bass port to push your sound out into the world. There’s also a USB port to easily record tracks into your DAW using the Rumble LT25 as your interface, plus a stereo headphone jack.

But if that was all the Rumble LT25 was about, then there wouldn’t really be any need for all those other sounds, right? So you’ll find edgier, rougher sounding rock basses, fat distortions, presets optimised for slap-and-pop techniques, deep dubby sounds, ratty fuzzes and more.

That eight-inch driver is not a huge speaker for a bass amp, but the solid cabinet construction really helps to maximise the sound, focus the low-end through the bass port and give you lots of detail in the middle and high frequencies through the driver. A bigger speaker might have given the amp more volume, but at the cost of the sonic fine-points of some of the other stuff the amp is designed to do.

What’s that, you say? Other stuff? Why yes: the Rumble LT25 is designed not just to offer classic standard bass tones, but also sounds that are intentionally more unique and creative – the idea being that Fender wants to push bass players to be inspired to explore new sounds and styles. There are weird Leslie rotating speaker tones, fat distortions, tremolo... Sounds that we often associate more with guitarists, but which can really help bassists to carve out their own special place in the world.

The classic Fender tremolo sound in particular is really well-represented here, and after over half a century of that sound being used as maybe an afterthought in bass processors while guitarists and electric piano players get to have all the fun, it really feels like it’s being given the care and attention it deserves in the bass sphere. Combine it with some spring reverb for a David Lynch kind of feel, cover it in distortion for a post-rock fuzzed-out throb, or use it to add a slow subtle sense of movement to long, sustained notes in a ballad bassline.

Or do what Fender really hopes you’ll do, and accidentally stumble onto a new use for the effect which will go on to inspire the next generation of bass players and make you rich and famous.

The first thing you’ll notice when you plug the LT25 in is that there’s a really usable ‘flat and dry’ sound that lets your bass’ own natural voice do the talking, but which also serves as the perfect platform for effects (either the amp’s built-in ones or external pedals). Dial in a flat sound and hit it with some compression, and you’ll have a tone that would be flexible and reliable enough for an entire set’s worth of cover songs right there.

Would more volume capability be nice? Well, yeah. But there are bigger amps in the series if that’s what you’re after. If you need an amp capable of inspiring you at home, in the jam room or for small gigs, this amp is well-equipped to push you towards new ideas, new sounds and new songs. And hey, you can always mic it up onstage if you land a bigger gig before you land a bigger amp. With the LT25, Fender has used its platform as innovators to build an amp that wants you to join the innovation.