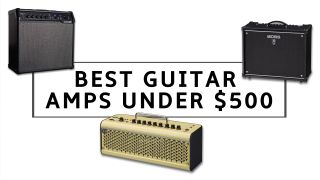 It’s a well-worn cliché, but there genuinely has never been a better time to buy a cheap guitar amp, especially if you’re a beginner or you're looking for a wallet-friendly practice amp.

Today’s budget combos and heads not only offer better tones than ever before, but many deliver them in lighter, smaller formats, too, whether you’re looking for a recording head, giggable combo or desktop practice amp. With that in mind, we’ve rounded up today’s best budget guitar amps under $500.

The 9 combos gathered here run the gamut from tiny tube terrors to solid-state digital modeling wonders, and range in output from 120 watts all the way down to 0.5. But they all pack tons of power and punch, with top-notch tones, features and functionality – and all for under $500 to boot. Now that's value for money.

What is the best budget guitar amp under $500?

Highly praised among guitarists of all abilities, the Boss Katana MkII series offers the best tone-for-buck ratio of any guitar amp on the market right now. Packing 100W of power, this model is suitable for home and gig use alike. With so many fantastic options available, giving it top points is really saying something.

All the amp’s parameters can be adjusted via Boss’s Tone Studio software, and line-outs and USB recording mean it’s as suited to the home studio as it is to the stage. All things considered, it’s the best budget guitar amp under $500 right now.

The first question to ask before you buy any guitar amp is ‘where am I going to be playing this?’ Beginner guitarists will want to look to cheap practice amps, designed for great tone at low volumes at home.

Blackstar’s Fly 3 is the most portable offering around right now, but combos such as Line 6’s Spider V MkII deliver a wealth of classic sounds from an easy-to-use interface, with a ton of practice aids onboard. Many of these amps also make great recording options, too, with Yamaha’s THR30II our favorite for getting outstanding mix-ready tones straight from the box.

If you’re looking to play live, you’ll need to invest in a higher-output offering, but you’d be surprised by how much volume, say, Orange’s 20W Micro Dark or the 15W EVH 5150III LBXII can put out, especially if you’re taking your first steps in the live arena.

Of course, if you opt for a head, you’ll want to invest in a matching cabinet, too, so weigh that up when comparing prices with the 1x12” combos below, which are already kitted out with a speaker and are primed and ready to rock.

This solid-state 100W model is gig-ready, and like the rest of the range, boasts five amp characters (Clean, Crunch, Lead, Brown and Acoustic), plus variations for each. This being a Boss amp, you also get five independent digital effects sections thrown in (Booster, Mod, FX, Delay and Reverb), all of which are savable across eight tone setting memories.

This tiny unit has a big, rich voice

Possibly the world’s only bona fide metal amp that can fit inside a guitar case, the Micro Dark is nevertheless packed with features that include volume, gain and shape controls, a 1/4-inch headphone output, speaker output (minimum 8-ohm load) and an effect loop.

The tiny unit boasts a preamp driven by a single 12AX7 tube and a 20-watt solid-state power amplifier that pumps out impressively loud volume levels, with mammoth bass thump and harmonically rich grind.

The shape control produces a variety of tones by sweeping across a wide midrange sweet spot that can also enhance treble and bass as desired.

The effect loop, meanwhile, enables guitarists to patch a studio multi-effects unit, reverb, delay or modulation pedal in between the preamp and power amp sections to produce truly professional-quality tones with low noise and impressive definition and articulation that sound particularly huge when recorded.

A surprisingly versatile and powerful “secret” weapon for metal guitarists who love highly saturated grind but are tired of grinding their spinal discs lifting heavy equipment.

A great option for amp modeling on a budget

Fender is no noob when it comes to amp modeling and its Mustang series has always been impressive in terms of features, sound quality and ease of use. The LT25 is a portable modeling combo featuring an eight-inch speaker, 20 amp models, 25 effects, USB connectivity and an auxiliary input.

You’ll find 30 presets on-board presets, easily selectable using the large encoder to the right of the amp’s screen. These presets can be tweaked and your custom profile saved with ease.

There are plenty of Fender’s typically smooth, bright and clean sounds on offer here, but there are some chunkier high gain emulations in the box too.

In terms of effects, you get everything from compression and gates, through to octave, auto-wah, delays and reverbs. If you’re a beginner or a student, for this price, you can’t go wrong.

The company's first foray into digital modeling is a big hit

Whereas most digital modeling amps try to be everything to everybody, the CODE50 mainly focuses on the company’s greatest strength - genuine Marshall tones.

Effects consist of all the essentials like compression, overdrive, modulation, reverb and delay, and up to five effects can be used at once. The free Marshall Gateway app allows users to control all functions with an iOS or Android device via Bluetooth.

A great choice if you love Marshall tones but also desire the convenience, versatility and power of a modern digital modeling amp.

Beginner? This is one of the best budget guitar amps under $500 for you right now

You also get a ton of practice aids thrown in, including a tuner, metronome, drum loops and a 60-second looper, plus direct recording via XLR and USB, and even built-in wireless capability. It’s all controlled via an easy-to-use interface and Line 6’s free Spider V Remote app, which all combines to make this the best budget guitar amp for beginners.

£479
View at Amazon
Prime
£499
View at Amazon
See all prices (2 found)
Versatile features
Vintage valve tones in solid-state design
Adjustable from 30 watts down to 0.5 watts
Not much

The 30-watt Blues Cube Hot boasts a 12-inch custom speaker and footswitchable boost and EQ, as well as four output levels, from 30 watts down to around 0.5 watts, to properly reproduce the sound of a valve power stage driven into cut-off at any volume level.

At full power, the Blues Cube Hot is loud enough for small gigs, while the 0.5-watt setting is ideal for recording and practice. Excellent quality, value and reliability wrapped in a compact, portable and great-sounding package.

This miniature amp stack, a recreation of the iconic Super Beatle, stands nearly two feet tall. But don’t be fooled by its diminutive stature - the amp is more than loud enough.

The Superbeetle can pump out 50 watts of output at four ohms, 25 watts at eight ohms and 12.5 watts at 16 ohms. The head is powered by analog Nutube circuitry, which employs a VFD (vacuum fluorescent display) tube that captures the same sound and response of vacuum tubes without any of the inconsistent elements.

Controls include volume, bass, treble and gain and a mini-toggle standby switch. The digital spring reverb and tremolo each have their own singular control, with the tremolo being driven by Nutube technology.

The result is classic looks combined with sweet jangly tone in a miniature amp stack that will sit well onstage - or anywhere.