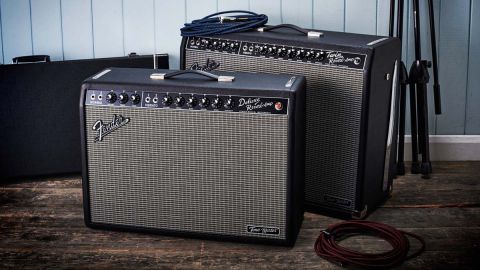 If you’re a gigging player who wants the style and punch of a black-panel Deluxe or Twin Reverb without the weight, these are definitely worth a listen...

Ever since its introduction in 1963, Fender’s so-called ‘Blackface’ series has represented a zenith for the vintage era of American guitar amp design.

Such was Fender’s dominance that two amps in particular, the Deluxe Reverb and Twin Reverb combos, went on to become standard equipment for clubs, recording studios and stages all over the world. Fender has reinvented the Deluxe and Twin several times, including digital versions with the Cyber-Twin and Cyber-Deluxe, both of which were introduced nearly two decades ago.

Digital technology has come a long way since then. Today, we’re used to hyper-realistic amp and effects models, infinite cloud-based presets, Wi-Fi, Bluetooth audio streaming and more, much of it pioneered by Fender.

Announced at this year’s summer NAMM Show in Nashville, Fender’s latest digital offerings, the Tone Master Twin Reverb and Deluxe Reverb, surprised everyone by taking a sharp left turn off the digital mainstream: they’re modelling amplifiers – but with a big difference. From the front, the two Tone Master amps look practically identical to their 1960s counterparts. However, there are no LED displays or preset buttons to be found, because there are no presets to display.

What Fender has done is to use the formidable power of modern quad-core processors to digitally recreate one amplifier to an unprecedented level of accuracy. The combos have identical features to the originals, too. The Deluxe Reverb has non-switching Normal and Vibrato channels, with two pairs of high- and low-gain inputs feeding Volume, Treble and Bass controls.

On the rear panels, the digital wizardry is more visible: the Deluxe Reverb uses a 100-watt Class D output stage to simulate the 22 watts of the 6V6-powered original, while the Tone Master Twin Reverb uses 200 watts to emulate a quartet of 6L6s producing around 85 watts.

Both amps have a rotary switch to attenuate output volume, with six (simulated) settings ranging through 22, 12, five, one, 0.5 and 0.2 watts on the Deluxe Reverb, and 85, 40, 22, 12, five and one watts on the Twin. There’s also a balanced three-pin XLR line out, with a ground lift and a level control for mic or line desk connections.

A cabinet simulation switch provides a flat response or two custom-made impulse responses, either an SM57 dynamic mic or the smoother extended bass of a ribbon microphone. A single jack socket connects to the supplied two-button footswitch, which toggles the effects.

Hidden on the bottom of the pressed steel tray chassis, there’s a micro USB socket together with a small button switch and LED indicator, intended for firmware updates. The standby switch mutes the speakers but leaves the line out active.

The Tone Master’s Class D output stage and universal switched mode power supply mean there are no heavy transformers. Fender has also used lightweight solid pine for the cabinets and upgraded the loudspeakers to custom-designed Jensens with neodymium magnets. All this adds up to a substantial weight saving, with both amps tipping the scales at roughly half that of their valve equivalents.

Think about that for a moment: a Twin Reverb as loud as the original that can easily be picked up and carried in one hand. Despite their light weight, both Tone Masters are built to a very high standard with robust circuit boards, expertly finished cabinets and authentic hardware.

A digital black-panel Twin that you can lift with one hand and attenuate its output? We are living in the future.

The Tone Master Deluxe Reverb is a faithful digital recreation of a black-panel classic with reduced weight and no valve reliability issues.

They certainly look the part, but the big question is how close has Fender come to replicating the complex tones of the Deluxe and Twin in the digital domain? The answer is very close indeed.

With no preamp gain controls, if you wanted to hear overdrive on a valve original you had to turn it up to around halfway before anything exciting started to happen. This is exactly reproduced on the Tone Masters, with the added benefit of being able to turn down the output power on the rear panel.

Below ‘5’, both amps start off with the expansive treble, smooth bass and slightly scooped midrange that typifies great black-panel amp tone, with a subtle chiming effect at around ‘4’, after which the overdrive begins to take over, turning into a respectable crunch with the volume control on 10, which has to be balanced by turning the bass way down.

This isn’t something you could ever do sensibly on a valve Twin Reverb; even a Deluxe can be way too loud for some pubs and clubs.

The distortion colours and dynamic response are very authentic here, too. We’d say the Deluxe could do with a little more sag, while the faster attack of the silicon-rectified Twin is what we’d expect.

We felt that the overall tone on both amps’ Vibrato channels was just a little too bright, while the Normal channel EQ was pretty much spot on. The effects on offer are generally superb. Everyone has their own idea of the ‘perfect’ tremolo sound and we felt the Tone Masters’ needed a little more reach in the low-speed region, although there’s plenty of usable effect across the Speed knob’s travel.

Digital reverb convolution lets you hear details such as the ping-pong cascade of pick attacks travelling back and forth along the virtual springs. One thing that’s missing is the mains transformer hum picked up by reverb spring transducers. In fact, there’s no hint of hum or hiss on either amp.

The Tone Masters make good platforms for external effects; there’s no loop, of course, so everything has to sit between guitar and amp. Overdrives work nicely without causing any unwanted noise, although we’d be wary of using pedals with very high output levels.

The microphone IRs are excellent and provide instant authentic tone for PA or recording use, while both amps have volume to spare.

One of Fender’s best-known features, the Tone Master power jewel glows red in use and amber for standby when the speakers are muted but the line out remains active – perfect for quiet stages or late-night recording.

Both Tone Masters include this balanced line out, complete with a level control, ground lift and a choice of microphone IR simulations.

These amps ably demonstrate how today’s digital technology can reproduce the complexities of a valve amplifier, to the point where smaller differences become increasingly less significant. If you critically compared a well-restored original Deluxe Reverb in a studio, you may hear a difference, but in a live band mix we’d challenge anyone to identify the Tone Masters from the real deal.

They also represent a different yet equally credible approach to digital modelling: if all you want is a single amp model, why have all the editing frippery? Perhaps there’s also an element of Fender looking into the not-so-distant future, with just a handful of mass-production valve factories left serving the entire world market. That said, the lack of user access to the digital stuff is a bold move.

Some limited control over personaltaste parameters such as reverb tone and vibrato, together with a global EQ, would be useful. As it stands, you’re getting a fixed ‘idealised’ version, when the originals could be tweaked under the hood.

Price isn’t so easy to quantify. Compared to the valve versions, both combos are great value, but there are other modelling amps offering more functions for less money. However, if you’re a gigging player who wants the style and punch of a black-panel Deluxe or Twin Reverb without the weight, these are definitely worth a listen.