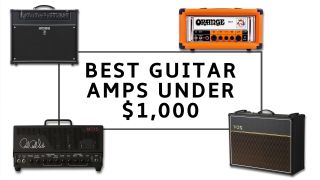 Ultimately, the amp you plug into affects your tone more than any electric guitar or effects pedal. A great guitar amp can make an average guitar sound incredible, though that doesn’t necessarily work the other way around – which is why, of course, it’s incredibly important to find the amp with the right tones and features for your needs.

While the more you spend, the more you get, it’s definitely possible to find all this in a guitar amplifier at the cheaper end of the scale, as this guide to the best guitar amps under $1,000 proves…

The PRS MT 15 Mark Tremonti is an absolute growler of an amp that can handle rich cleans to full-throttle metal intensity. Further proof, if it was ever needed, that Mr. Tremonti really knows his stuff when it comes to guitar tones.

With built-in studio quality reverb and lower volume mode bringing its 20-Watts down to just two, plus a series effects loop and an mp3/line in, the Blackstar HT-20R MkII is the kind of amp that will work just as well on stage as it does at home.

Finding the right amp in this day and age isn’t easy. There’s so much out there, each head or combo with its own pros and cons. Power should really be at the forefront of your considerations when considering one of the best guitar amps under $1,000 – there really is no point in owning a 100-Watt stack with no attenuation for bedroom playing. Likewise, the lower powered mini heads that have become popular in recent years might not cut it if you find yourself performing venues without being mic’d up or headlining bigger outdoor festivals…

You should also have a good idea of how much gain you’ll be needing. Of course, there are some players who rely on clean amps and swear by their overdrive and distortion pedals for gain, but most rock/metal musicians will prefer an amp to do the bulk of the work before anything else gets added. And at the opposite end of the tonal spectrum, country and funk players will usually prefer an amp that thrives mainly on cleans and have little use for anything beyond that.

A great all-rounder – the best guitar amp under $1,000 right now

Alter Bridge guitarist Mark Tremonti is no stranger to giant guitar tones – his band have been conquering arenas for long enough for him to know what modern rock players need out of an amp. This signature head from PRS, who also make the guitars that travel with him around the world, covers all kinds of tones with minimal ease.

£519
View at Bax-shop UK
Prime
Low Stock
£552.14
View at Amazon
See all prices (3 found)
ISF control to dial between UK and US voicing
Power attenuator
Nothing at this price

Started by a couple of ex-Marshall employees back in 2007, Blackstar have become one of the most prominent names in the affordable to mid-tier end of the market. And with good reason – amps like this HT20 MkII pack plenty of power with also the flexibility for home recording and practicing.

The Katana series brought high quality amp modeling and those classic effects Boss are famous for into one ingenious package. This update packs even more tones, features and options to dial in exactly the sound in your head – such as a variable solo boost and three custom EQ curves.

Old-school charm in a small and affordable package

With a pair of EL84 housed in its engine room pushing your signal through two 12” Celestion Greenback speakers, this 15-Watt twin has everything we know and love about Vox without breaking the bank. It’s also deceptively loud and more than capable of pushing serious air from the stage. On top of the classic blues and early rock tones Vox are renowned for, there’s also tremolo and spring reverb on board…

One of the best guitar amps under $1,000 if low-end is your thing

There’s just something about the low-end response you get from an Orange amp that makes other brands sound fizzy in comparison. Anyone looking to dial in darker blues tones or sludgy stoner rock will undoubtedly appreciate the sheer sonic depth of this OR15H – which, despite being only 15-Watts, will be guaranteed to shake the earth under your feet.

The digital amp with the boutique vibe

£385
View at Bax-shop UK
£498.56
View at Amazon
See all prices (3 found)
A lot of amp for the money
TVP modeling tech is very convincing
Uncanny tube-like response
With 6 preamp voicings, it’s versatile
The onboard effects aren’t the most exciting out there

The Silverline Deluxe is the sort of amp that could quite possibly convert old-school tube die-hards to a digital future. It offers the choice of six different power tube responses available at the turn of a rotary dial.

Choose from EL84s, 6V6s, EL34s, KT66s, 6L6s, or KT88s, choose from six preamp voices, then dial in Blackstar’s patented ISF function to choose whereabouts you want to park yourself on the Transatlantic tone spectrum, and then you’re off. An intuitive control panel with 3-band EQ belies the digital voodoo going on under the hood.

You can save your favorite tones to a preset and access them via a footswitch, and go deeper with Blackstar’s free INSIDER software. The Silverline is super-versatile, ideal for the gigging guitarist, with all the necessary connectivity to make recording a breeze. Sure, it could be the amp of the future, but with an uncanny tube feel and response, the Silverline Deluxe has one foot firmly in the past, too, and that’s a good thing.

If you look at the list of Marshall endorsees over the years, you’ll realise just how many legendary recordings have been made with their game-changing amps. This all-tube 40-Watt combo from the DSL series packs a lot of classic sounds into a small amount of space, with digital reverb, a bypassable series effects loop and a line output with Softube's accurate emulation of a Marshall 1960 cab.

A true investment piece from Fender

It’s the most expensive amp in this round-up but with good reason. This special edition '65 Princeton Reverb (exclusive to Sweetwater if you want the lacquered tweed version) feels incredibly high-end and collectable. Placing more emphasis on vintage class than modern versatility, it boasts a 12" Eminence Cannabis Rex speaker, tube reverb and tremolo and – finished in lacquered tweed – looks as gorgeous as it sounds.

This Egnater Rebel-30 combo might look more like a tiny practice amp or home speaker, but it actually packs 30-watts of valve power, offering users the flexibility of choosing a pair of EL84s or 6V6s for their tones. It also offers a speaker-loaded direct out and independent reverb controls as well as a buffered effects loop. All in all, there’s really not that much it can’t do…