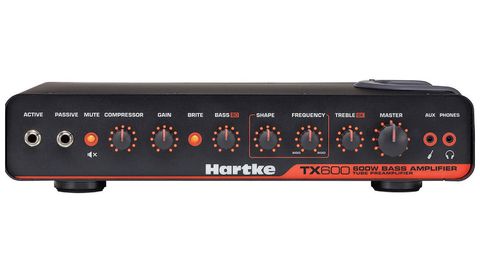 The Hartke TX600 is the venerable amp company’s first foray into the Class D/switchmode power supply (SMPS) revolution, a technology that now dominates the market.

Since its initial integration into bass heads over a decade ago, the phenomenal weight savings of Class D/SMPS (versus Class AB designs with linear power supplies) has made it an easy sell to bass players tired of schlepping 30-plus pounds of amp to gigs.

In many ways, the TX600 is typical of the new breed: it couples a proprietary preamp circuit with a third-party Class D power-amp module. Yet, it’s also a bit idiosyncratic by contemporary standards, utilizing an in-house SMPS and a tube/solid-state preamp circuit that’s a little esoteric in its function.

One of the TX600’s chief selling points will be its exceptionally low cost. At only $400, it’s exemplary of the benefits of inexpensive overseas manufacturing. In my experience, little if nothing is lost quality-wise with amps made in China. The amp’s construction is utilitarian and durable. The chassis is one of several I’ve recently encountered with a similar design: rounded edges with a big integrated side handle.

The Hartke’s interface is straightforward. The ACTIVE and PASSIVE ¼" jacks allow good gain staging. The always-welcome MUTE switch comes next, from left to right, followed by the one-knob COMPRESSOR and a preamp GAIN control. The BRITE switch engages a 10kHz boost, and along with the rest of the EQ, is interactive with the preamp’s other tone-shaping parameters.

The source of this interactivity is the design Hartke chose for its EQ: a Fender-style tone stack. This circuit, first popularized in the Fender Dual Showman, is one of the most prevalent in bass and guitar amps—not because of precision or fidelity, but rather its intrinsically musical sound. Compared to an EQ with a series of buffered, active filters, the tone stack is a highly interactive series of highpass and lowpass filters.

Since a bass signal “sees” the sum total of all of the tone stacks’ component values (including the shifting resistance that occurs when one or more of the potentiometers is turned), each knob setting substantially affects the signal’s overall frequency character. Tone stacks are passive filters, meaning no gain is directly added when you turn up a knob, but in an amp’s signal chain, the tone stack is often followed by a stage that amplifies the signal (in a sense), creating a sensation that a boost has occurred.

Hartke added a cool twist to the standard tone-stack circuit with the FREQUENCY control, which allows a player to adjust the center frequency of the midrange filter, here confusingly called “SHAPE.”

In addition to the tone-stack EQ, the TX600 makes another nod to the old school with its integrated 12AX7 preamp tube. Without a schematic, it’s hard to know its role in the circuit, but one quick test of whether a tube is merely a marketing ploy is to check the voltage on the dual triode’s two anodes, or “plates.” If it’s high, there’s a good chance the tube is being put to real use. Sure enough, both plates measured over 200 volts—a good sign.

Like every bass-amp company I’m aware of, Hartke did not design or manufacture the TX600’s Class D power section. There’s no problem with that, as the complex nature of a well-designed Class D amp is best left to specialists rather than the bass-amp generalists in our community. (Interestingly, Hartke provides its own power supply. Given the broad product range in the Samson line, I imagine Hartke easily leveraged its in-house engineers for the task.) Hartke chose one of the best Class D manufacturers, Hypex, sourcing its UcD400 model. This leads me to my one real concern about the TX600: According to Hypex’s own literature, the UcD400 outputs a maximum 400 watts into a 4Ω load. How, then, does the TX600 manage 600 watts into the same speaker load, as Hartke claims?

I tested the TX600 with a big variety of basses and cabs, including vintage Fenders, a Callowhill, an F Bass BN5, and a Moollon J-V classic. Test cabinets included everything from an Ampeg SVT 8x10 to a Markbass New York 121 1x12.

The Hartke is one of the rootsier-sounding Class D/SMPS heads I’ve heard: authentically tube-y and colorful, in the grand tradition of the Ampeg B-15 or Fender Bassman, but with much more output power.

If you love vintage amps’ guts and thrust but don’t want to deal with the schlep, I can’t think of a better value out there than the TX600. Its creamy, syrupy texture is just right with passive basses or anyone looking for a smooth sound. The attack is a bit soft, but that never bothered me, given its inherent personality.

The compressor, which offers control only over the circuit’s threshold, does well for a one-knob job, taming transients and smoothing out sound without being too aggressive, thanks in part to its 2:1 ratio. The EQ will be familiar if you’ve used a Fender-style tone stack, but if you’re accustomed to a conventional Baxandall-inspired boost/cut circuit, there’s a learning curve. Plus, no matter your familiarity with the circuit, it’ll never be precise by any normal standard. It’s best to think of the TX600’s EQ as an abstract set of frequency-dependant filters that combine to produce a host of musical tones.

As I somewhat expected, given the Hypex Class D module’s published output rating, the TX600 didn’t seem as loud as I might expect from a 600-watt amp. A conversation with the folks at Hartke explained at least some of the problem: Early models like my tester require the player to dime the MASTER knob to get the amp’s full clean output.

Later models make the 12:00 MASTER position near to full output, a more familiar circuit to most players. The TX600 is sweet, though, although it won’t provide enough power for truly big gigs. Also, when it’s being pushed (or, weirdly, even occasionally when it idles), the TX600’s fan is a bit louder than I’d like.

I dug the TX600, especially when I considered its low price. Now that the Class D/SMPS revolution has entered maturity, it’s cool how many flavors are available. The TX600 is the right amp for someone who likes trad tone with guts. It may not be the loudest amp out there, but its cocktail of sweet sound and low price make it a real bargain.