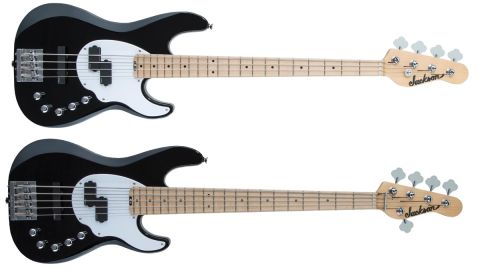 The CBXM Ellefson basses are proof, if needed, that Jackson can do non-metal basses, too. They are remarkably versatile and look to you to impress your style on them, not the other way around.

As Jackson continue making serious inroads into the bass space, this new range suggests something of a paradox; as the signature model of the longtime Megadeth bassist David Ellefson, one is forgiven for assuming that the CBXM was designed with metallers in mind.

Conversely, with a robust suite of tone-shaping features, there’s little to suggest this new series wouldn’t appeal to most other styles as well. Gone is the iconic Jackson headstock, replaced by a more traditional design.

More than a mere design choice, this nod to the old school sends a halcyon call to all bassists, with the hope that in this new series, players of all styles, genres and pedigrees will find something to love. We holed up with the four and five-string models for an extra-long test-drive to see how they measure up.

Beyond its shape, the headstock is notable for its size – a larger piece that not only promotes an even keel, but that helps to deliver a smooth and satisfying tone right out of the box. Oversized chrome tuners run across the top, facilitating quick in-flight adjustments, with a string tree above the nut to manage tension.

The instrument boasts a heroic capacity for staying in tune amid prolonged periods of frenetic, neighbor-bothering thrashing. The poplar body contours offer ample support along the top, and the lower contour arcs comfortably over the leg while sitting.

It’s quite sturdy, with a bolt-on maple neck that features 21 jumbo frets. Also, any gigging musician knows well the neck-torqueing perils of callous baggage handlers and overly-crowded loud-out rooms; handily, the CBXM features a heel-mounted spoke wheel just above the bridge. This enables the player to quickly and efficiently adjust the truss rod, should any trauma befall the neck.

Given the price point and of course, Mr. Ellefson’s pedigree, we expected high performance in the attack, and the CBXM did not disappoint.

It features EMG HZ35 active humbucking pickups, with the P pulled to the back, unleashing a booming low end, and the J set in the front to deliver a sharpened attack. There’s also an active three-band EQ that opens a galaxy of possibilities for tonal exploration. Set flat, our starting point is fat, rumbling and exceedingly tasty.

On the five-string, a soft push of the B string rewards us with a smooth, sonorous tone that quickly fills the room. Very few adjustments are necessary with the mids, as they tend to cut in rather sharply, in line with a metal-oriented instrument.

Adjusting the EQ, we’re able to move effortlessly between a jagged metal attack and a creamy blues vibe, which deepens even further when we adjust the blend knob, bringing more warmth into the mix by dialling up the neck pickup.

The HiMass bridge yields a satisfying growl and all of the sustain implied by its reputation. Pushing up the highs a bit more, the notes ring with pristine clarity through to the highest note on the G.

Unsurprisingly, the CBXM is an absolute beast when it comes to harder, aggressive genres but, in line with Ellefson’s own playing style, the tonal vistas are unlimited – and it's just as much fun jamming out to some dusty old Texas blues albums as it is with heavier fare.

From a playability perspective, the CBXM delivers an impressively smooth ride. The spacing between frets is generous – impressively so on the five-string. Its sleek, 12”-16” compound radius laurel fingerboard is nice and round up at the nut, fitting comfortably in the hand when sitting back in the pocket.

This contour flattens as we move up the neck, allowing for a speedy ascent into the upper register – a particularly notable accommodation for musicians who play with heightened technicality or who spend a good deal of time beyond the 12th fret.

Both four- and five-string models proved to be boatloads of fun to play, and drew lusty compliments during jam sessions for both their sound and appearance. Ultimately, the CBXM delivers all of the design efficiencies and horsepower of an elite rock bass in a classic Precision body.

Particularly on the five-string, the sheer force of the low-end attack makes it a no-brainer for metallers – but the high-quality electronics and spacious tonal palette expand the arena of possibilities for other styles as well. We put both models through the wringer and the longer we played, the more difficult it was to put them down.

The bottom line is that, with the CBXM X-Series, Jackson has delivered a sturdy, top-line instrument, with above-average playability, and a devastating sound to boot.