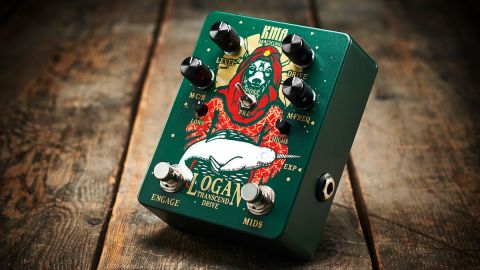 A nicely responsive drive that excels in the role of adding dirt to clean amp. The precise sculpting of dirt tone combined with practical performance features confers a flexibility that really does transcend the standard drive format.

As midrange voicing greatly affects the character of distortion, it follows that a drive pedal with adjustable midrange would have increased flexibility over its peers, which appears to be the main thrust of the Logan Transcend Drive.

Standard Level and Drive knobs accompany smaller knobs, which very effectively adjust Lows and Highs by up to 15dB, but the two-knob midrange adjustment offers more detailed shaping using semi-parametric EQ. There’s cut or boost of up to 12dB around a frequency in a range from the low-end thump of 100Hz through to the chimey ‘presence’ of 2.5kHz, with a choice of where the midrange sits in the pedal’s signal path.

Putting it before the main gain stage can really focus the character of the drive – a boost adding more saturation to punch through at the selected frequency. As the mids can be brought in and out by a dedicated footswitch, this can effectively give you two distinct, instantly available sounds.

Putting mids after the main gain stage offers more general overall EQ and can lend itself to onstage boost for solos when footswitched. For more flexibility in performance, an expression pedal can set the mid EQ frequency on the fly. It could even be used as a wah – an internal trim pot adjusts midrange bandwidth to tailor the response.

Another trim-pot blends in clean signal with the overdriven tone for increased tonal options. We’d rather it had been on the top panel, but it’s more a set-and-forget adjustment that will suit bass players who want to add a little growl to their clean sound rather than overwhelming it.

There’s a naturally dynamic feel playing through the Logan and it can deliver in a range from clean boost right through tothroaty cranked amp tones that work well in a classic rock context, although that ability to determine where the dirt lands in the frequency spectrum should make it a versatile tone-shaper for any music.

A nicely responsive drive that excels in the role of adding dirt to clean amp. The precise sculpting of dirt tone combined with practical performance features confers a flexibility that really does transcend the standard drive format.

Orange Bax Bangeetar $379, £199
A “pre-EQ pedal” and loosely based on the gain structure of the Rockerverb amp, this pedal has knobs for bass and treble plus a fully-parametric Baxandall circuit for midrange with knobs for cut/boost, Q (bandwidth) and frequency.

DOD Boneshaker $99.95, £129
Distortion rather than overdrive and with circuitry specifically designed for extended-range guitars, the Boneshaker offers a flexible three-band semi-parametric EQ, so you can tweak frequency and level in the low, mid and high ranges.

Fender Santa Ana Overdrive $249.99, £160
The Santa Ana is an FET-based overdrive pedal with two voicings and an extra footswitch for added boost, and has versatile EQ with a set of four knobs (Bass, Middle, Treble, Presence) reminiscent of a Fender amp front panel.