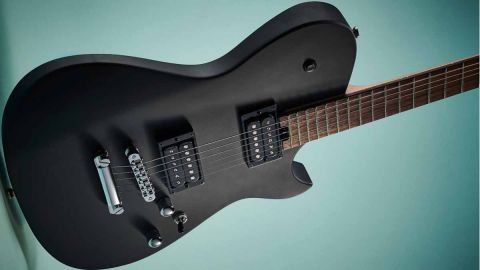 Affordable, cutting-edge, with a super-comfortable neck and a kill switch for those spotlight moments, the Manson META MBM-1 is a formidable contemporary rock guitar.

For most of Muse’s career, frontman Matt Bellamy has played custom-built Manson electric guitars, designed and built by Hugh Manson and Tim Stark.

But in 2015, Muse fans who couldn’t stump to the four-figure prices of Manson models had their dreams realised with the release of the MBC-1: a collaboration of Manson and Matt Bellamy’s designs and guitar manufacturing giant Cort to produce an affordable signature model.

That guitar was released to supermassive acclaim, bagging awards left, right and centre simply as an incredible, affordable electric, regardless of the signature association. The Cort/Manson series followed with the Classic TC and M-Jet models, but fast-forward to 2020 and the partnership continues – with a few important changes.

First up is the big news that Matt Bellamy is now the majority shareholder in Manson – based in his native Devon. Next is that the start of 2020 brought us a brand new signature model in the Manson Meta MBM-1.

Out of the box, the MBM-1 cuts an identical figure to the previous signature model – the distinctive part-Tele/part Les Paul mash-up body, complete with a well thought out contour to help make it comfortable to play.

Elsewhere, the MBM-1 is loaded with a number of contemporary features – the matte black finish that’s seemingly impervious to fingerprints, the satin neck, Cort locking tuners, and the spoke wheel ‘hotrod’ truss rod nut which means you don’t need to remove the neck or fiddle with a restrictive channel to make adjustments.

Electronically, the MBM-1 is equally utilitarian: two Manson-branded humbuckers, a master volume, master tone and a three-way pickup switch, but this being a Matt Bellamy model, there’d be something amiss if there wasn’t a small hint of on-board experimentation. That comes in the form of a kill switch, neatly mounted to the upper bout.

There’s a common theme with every Manson guitar we’ve played, and it’s a combination of resonance and feel from that neck. Unplugged, the guitar is spritely, chiming away as we ring out some open chords.

V-shaped neck profiles can be Marmite to some players, particularly in a more vintage context, but Manson’s shape is referred to as a ‘soft V’. There’s definitely the distinct hump that you get from this type of profile, but it’s toned-down from, say, a 50s-style Strat, and combined with the 12”-16” compound radius adds up to a very comfortable playing experience.

Throw in the satin finish and you have a speedy, slim neck that is a great trade-off between vintage chunk and modern maneuverability.

Our review model came set up with a buzz-free, lower-than average action which made it even more comfortable to play. The laurel fingerboard is even and dark throughout, and our only complaint here is cosmetic.

• EVH Wolfgang Standard – $599 / £465
EVH is another frequent list-topper, and the Wolfgang offers a similar body shape, compound radius neck, and dual humbuckers with the addition of a licensed Floyd Rose.

• PRS SE Mira – $699 / £599
With a more double-cut approach, the PRS SE Mira gets you a solid dual-humbucker design with PRS’ ‘in-between’ 25” scale length. Like the Meta, it’s a fixed bridge, but also includes a coil split.

• Cort M-Jet – $699 / £469
Remove the signature association and kill switch from the MBM-1, and the M-Jet is a pretty faithful model. You get similar construction, pickups and many shared features.

While the bare-bones design of no inlaid fret markers looks great, it can be disorientating if you’re not used to it. Instead, you’re forced to rely on the top-mounted dots.

Sound-wise, the MBM-1 performs how we expected, those Manson ’buckers supplying us with thick, harmonically rich modern rock sounds under the distortion of our Diezel emulations. Jumping between the two gives seamless tonal change with the levels matched perfectly.

Rolling back the volume cleans things up, and while weeping blues tones might not immediately spring to mind with this guitar, they are versatile enough to throw at pretty much any tone across the rock spectrum.

The only thing that could make it better would be the inclusion of a singlecoil. Manson offer a coil split as an upgrade, but we’d love to see a version of this guitar with a true singlecoil pickup in the neck position, too.

There’s no shortage of brands offering incredible quality in the mid-priced battleground, but Manson have delivered a workhorse clothesline to its competition here. Contemporary feel, ergonomic playability, efficient design and killer sounds should cost more than this.