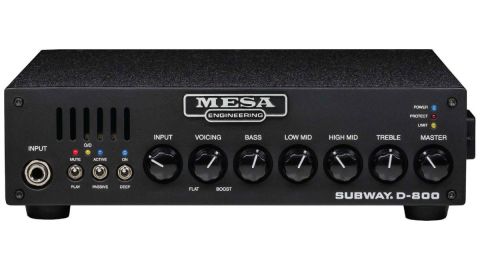 The latest in an emerging trend of no-compromise lightweight heads, the Subway D-800 offers tons of headroom, volume, and flexibility, with grit for rockers and clean punch for the rest.

Rare is the big amplifier company whose bass products are as worthy of serious consideration as its guitar offerings. Given how different the sonic and technological needs of the two cohorts are, the manufacturing and engineering breadth to mass-produce high-quality guitar and bass amps is just beyond most amp builders’ MO.

Mesa/Boogie has always been an interesting exception, though. Although the company made its name with its compact and flexible tube guitar amps (and later with its ultra-aggressive Triple Rectifier half-stacks), its bass amps have always been solid performers, or in some cases, downright legendary, like the all-tube Bass 400+.

While Mesa has stuck mostly to all-tube and solid-state bass amps with a linear power supply and Class AB power amp, Mesa’s latest head marks a big—if late—step into the well-populated world of powerful heads that leverage the efficiency and low weight of Class D power amps and switch-mode power supplies.

As is almost universally the case with Mesa/Boogie amps, the Subway D-800 is handsome, with a no-nonsense exterior and elegant front-panel graphics and layout. The controls are self-explanatory. Input governs gain at the J-FET-based first stage and couples with the o/d indicator to precisely monitor overdrive.

The voicing filter is a complex, variable-frequency response curve that is essentially flat when it’s fully counter-clockwise and progressively more “smiley-face” as it’s rolled up, with boosted bass and treble and a progressively attenuated midrange at higher settings.

The 4-band EQ is standard fare, with shelving bass and treble filters accompanying two bands of peaking midrange. Finally, master operates as expected, controlling the input signal’s gain as it enters the power amp. There’s also a deep switch, which slightly boosts low frequencies and lowers the cutoff of a high-pass filter (more on that below).

Like virtually every other lightweight Class D/SMPS head on the market, the Subway D-800 utilizes a 3rd-party power amplifier and power-supply module, in this case the ICEpower 700ASC/X. The know-how and R&D resources required to design a high-performing Class D amplifier and robust switchmode power supply are simply out of the scope of most bass amplifier manufacturers, especially given the extraordinary performance of modules from ICEpower and other manufacturers selling amp/power supply modules as original equipment.

Rather, the unique stamp of each amp builder is better seen in the preamp tone and overall design integration of a given head. A well-engineered amp/PS module ought to just make the preamp sound louder. The 700ASC/X is an exceptionally high-performing unit that’s more than up to the task, and unlike some other Class D/SMPS modules, it’s perfectly happy cruising along at a nominal 2Ù impedance. To further ensure stability, the Subway includes an internal, always-on highpass filter with a cutoff around 30Hz (this lowers a bit when the deep switch is engaged). It limits wasting power reproducing low frequencies that are below almost every bass cabinet’s low-end rolloff.

The Subway’s rear panel offers a plethora of connectivity and features. Two q" jacks offer headphone and auxiliary inputs for silent practice. It’s always nice to have, but the aux input should be an r" jack for easier compatibility with the typical cell phone source. Unusual for a solid-state amp, the Subway has an impedance switch. Also unusual is the Mesa’s remarkably flexible direct output, which allows switching between post-and pre-EQ signals, line and mic level output, and a ground lift. The Subway also benefits from the AC mains flexibility that’s one of the coolest benefits of a switchmode power supply. Got a gig in Europe? No sweat. Just get a plug adapter and turn the amp on. No external transformer necessary.

The Mesa’s construction is solid. The knobs, switches, and jacks are all top-notch stuff, and everything operated with a reassuring feel. The internal construction is competent, consisting of two printed circuitboards (the Mesa preamp and the ICEpower power supply and amplifier) utilizing through-hole construction, which would prove helpful should a repair be necessary (surface-mount construction is tougher to tinker with).

In my prototype tester, the small circuitboard that includes the power, protect, and limit LEDs was attached with flexible silicon adhesive rather than a more positive and firm connection, but production models anchor down the board with a pair of screws.

When you’ve played a lot of bass amps, you begin to associate a certain sound with each brand, whether it’s in their marketing or not. When it comes to Mesa amps, I tend to think of ample power, aggressive mids, and the ability to dial in some grind for heavier styles. I brought this baggage to my initial encounters with the Subway, and in many ways, it is every bit a typical Mesa/Boogie amp. It’s just that it’s also much more.

I tested the Subway with a variety of big and small cabinets, including the Subway Ultra-Lite cabs that Mesa designed to partner with the head (see sidebar, page 50). With the controls set for a flat response, the most overwhelming thing about the Subway is its incredible power: it’s a loud head with a seemingly limitless amount of headroom.

Class D amps with SMPS have come a long way since their introduction to the bass world about 15 years ago, and the Subway is an excellent example of the design’s maturity. It has the transient slam, lock-tight speaker control, and athletic explosiveness that used to be the exclusive purvey of traditional Class AB amps.

I really dug the Subway’s versatility. It was easy to get a reasonably vicious edge out of the amp, thanks to its gain/master circuit. To prevent the overdriven sound from getting too spitty, I eased off on the treble control, which at 4kHz is relatively low-voiced, making it an especially good accompaniment for dialing in rock tone.

The low cutoff point never bugged me, though, thanks to the amp’s flat frequency response with neutral EQ. To dial in an authoritative slap sound, I engaged the deep switch and rolled in a touch of voicing, which cut the mids just enough to make the thick lows and shimmering highs stand out. Fingerstyle tone was also a cinch, whether it was dull and thuddy or quick and midrangey.

Due to the amp’s ample power and high fidelity, varying my technique and/or changing onboard tone settings resulted in the wide-ranging tones I’d expect. While the Subway D-800 offers a host of speaker-and amp-protecting features to prevent overload and gig-ending catastrophes, they never engaged during use.

The Subway D-800 is one of the best bass amps Mesa has produced. It is every bit as loud as its forbearers, but it’s also hi-fi and flexible to a new degree. That it all comes in a package that’s under six pounds and costs around $700 ratchets up its value substantially. Plus, it comes with a nice black gig bag and an excellent and informative owner’s manual. I mean, really, what’s not to like?

Mesa/Boogie also sent along its two latest cabinets, designed to be paired with the Subway D-800. Consisting of a 1x12 ($650 street) and 1x15 ($750 street), the Ultra-Lite cabinets employ proprietary Mesa neodymium drivers and a horn tweeter. Their construction is excellent, with a substantial amount of internal bracing, Mesa’s “Tri-Port” front-baffle porting system, a durable vinyl covering, and beefy hardware. While the cabs save weight thanks to their neo drivers and Italian-poplar ply construction, they aren’t crazy-light like some other single-driver neo cabs. Thankfully, Mesa makes each the same width, so the whole system makes for an excellent stack along with the Subway head.

I was impressed with Ultra-Lite cabs. While their nominal 400-watt power rating would seem to be half what one might want with the Subway head, the truth is that it took some fairly extreme techniques and volumes to notably over-excurse the drivers and get ugly sound.

Overall, the cabs sound reasonably balanced, with a voicing that’s perhaps more in the traditional, beefy rock end of the spectrum. That said, the tweeter didn’t sound too harsh, and the handy-dandy L-pad made quick work of taming unwanted highs. As a system, the Ultra-Lite cabs make an excellent pair with the Subway D-800 head.