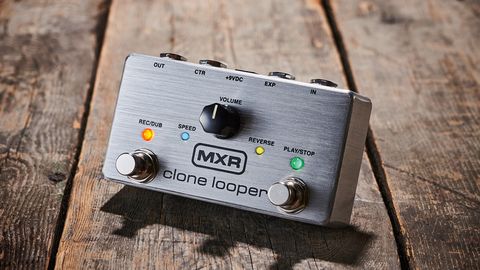 Combining all the necessary layering facilities with a few creative extras in a compact footprint, MXR’s pedal offers practicality at a decent price for anyone who wants a looper in their locker.

While looping has been instrumental in a successful musical career for Ed Sheeran and many others, a looper isn’t exactly an essential pedal for every guitar player.

It can, however, be a pretty useful one: a looper is a great home practice and ideas-generating songwriting aid, and can also be used as a creative substitute for a band behind a solo act’s live performance. Having a looper almost seems de rigueur for the modern busker.

Somewhere between the tiny single-footswitch models and the do-it-all looping behemoths, MXR’s first looper pedal aims to offer the most practical and useful range of features while keeping a compact footprint. And it does so in an ingenious way: the company has turned a standard-size MXR pedal (think Phase 90) sideways so that it can have a footswitch at each end, but has also furnished it with a volume knob that additionally works as a switch with three different functions depending on how you press it.

MXR is keen to stress the high sound quality of this pedal – and the 88.2kHz operation does mean that you get out what you put in without any noticeable sonic degradation.

There is six minutes of storage time available here and you can add an unlimited number of layers with no worries about building up an intricate composition and losing it when you power down, because the pedal will store it when the power is off.

Two footswitches, clearly defined in their roles, make operation dead simple. To start recording a loop you simply press the Rec/Dub footswitch and play for as long as you want. Hitting the Play/Stop button will end the recording and simultaneously start playback.

Recording is indicated by a red LED; playback lights up a green LED. Recording another layer is just a matter of pressing the Rec/Dub footswitch again, with the green LED helpfully flashing four times before the beginning of each loop cycle. If you mess up a layer or just want to lose the last one, a press and hold on the Play/Stop footswitch will take care of that. There are simple procedures for clearing a whole loop, too.

It really doesn’t take long to get up to speed with the basics of this pedal whether you just want to lay down a chord sequence to practise soloing over or you’re interested in building multiple layers. But there’s more if you want to spice things up. Besides setting the output volume, that black knob in the centre of the pedal also offers several creative possibilities.

A single push on it will get your loop playing at half-speed while a double press will take it to double-speed. If you want the loop to play backwards, a press and a short hold will reverse it. You can have altered speed and reverse at the same time. These can be musically useful features.

Recording single guitar notes at doublespeed with playback at normal (an octave down) will give you a bassline and a layer of reversed guitar for, say, chord swells, which can add texture and ear-candy interest to the music. The knob doesn’t sit as high as the two footswitches, which makes using it like a footswitch a little bit tricky, but if you’re pretty nifty with your feet then you may be able to press it with your toe without accidentally hitting the footswitches either side.

If the functions are something you’d be inclined to use quite a lot in a live situation, it would be worth investing in MXR’s matching M199 Tap Tempo Switch (£42), which can plug into the CTR input to take remote (and more robust) charge of the knob’s switching functions.

A tap switch can also be used plugged into the EXP input and can then initiate the Play Loop Once mode where a tap on the switch will set the loop playing from start to finish unless you tap it again, which will retrigger the loop from the start. This gives you options to keep retriggering for a stutter effect. The EXP input’s other use would be to plug in an actual expression pedal for controlling loop volume.

Combining all the necessary layering facilities with a few creative extras in a compact footprint, MXR’s pedal offers practicality at a decent price for anyone who wants a looper in their locker.