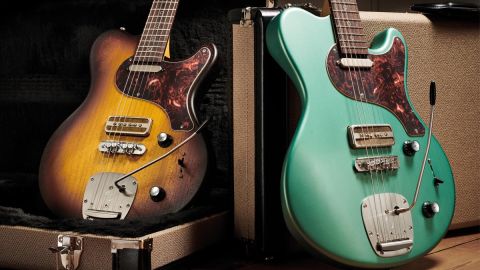 While it might fall into the low tier of Huber instruments, it’s far from a cheap date. But then there is nothing cheap about this guitar, either in terms of build or the hugely evocative, characterful sounds we hear.

We’ve never played a Nik Huber guitar that’s been anything other than spectacular. But within its surprisingly expansive range, there’s a duality that not every maker can match.

Nik seems equally at home with the ‘posh’ PRS-inspired aesthetic epitomised by the Dolphin and the blingier Orca models as he is with frankly superb rock ’n’ roll guitars such as the Krautster. The new Piet, which we first saw at this year’s NAMM Show in January, definitely drops into that latter style.

This bolt-on has delicious forearm and rib-cage contours and quite a large edge radius that lends an almost moulded style to the body, stunning in the muted green turquoise semi-gloss. On the one hand it’s standard bolt-on fare, but with so much skill, detail and quality on show there’s nothing utilitarian about this build.

Based on that Dolphin shape, it appears almost Telecaster-ish, but next to the real thing you see its much more rounded lower bouts and there’s a substantial nod to the Junior and Special, particularly with that Les Paul Junior-style pickguard. Like many modern makers, pulling disparate influences into a coherent design is something Nik does extremely well.

The diverse inspiration continues with the pickups and hardware. The former, by German maker Harry Häussel, look like perfectly cared for antiques: the Broad-N at the neck has a beautifully dulled sheen to its cover and is very firmly mounted to that scratchplate; the ‘foil’ P-90 mounts like a typical soapbar and looks like it came off a pawn-shop prize from the 60s.

Controls are simple, too, but it’s not a typical ‘offset’ setup in the least. “Well, I was looking at the bolt-on theme, plus, as you know, I’m a P-90 Junior guy,” Nik explains.

“I’ve been working on the gold-foil P-90 with Harry for six months… actually, way longer. At NAMM we had two Piets, one with two P-90s like that and the other with the Broad at the neck like you have there. I really like the sound of that neck pickup and I think it looks nicer.

“Looks aren’t the main thing, but I do think it suits the shape better. But I’m also thinking of tweaking the pickups a little. We’re still playing around with it.”

But it’s the Mastery vibrato here that substantially adds to the unique voice. This superb replacement for the Fender Jazzmaster/Jaguar vibrato not only cures the issues associated with the original but it looks like a work of art.

It’s especially evident with the bridge, with its two offset saddles held in place by two intonation screws per saddle. Unlike the originals, the bridge is solidly mounted and doesn’t rock as the vibrato is moved.

We have two Piets here. Under the green turquoise finish is an alder body in keeping with the Fender bolt-on recipe, of course. Our sunburst model is identical except that the bodywood is switched to okoume (also known as Gabon from where it originates), a ‘mahogany’ variant that’s used by an increasing number of makers, including Music Man and Eastman.

Perhaps surprisingly the okoume Piet is even lighter than the alder version, and the thin nitro satin open-pore finish illustrates the range of Huber’s finish options.

Fine details are everywhere: the aged but not reliced neckplate, tuners and metal output jack-plate. Even the plastic parts – the pickguard, truss rod cover and rear cavity plate – are de-sheened. There’s a subtle but quite large flamed figure on the neck back and lovely flecked figuring to the face of the headstock. Simple, subtle but oh so elegant.

Why do these so-called ‘boutique’ guitars cost so much? Well, one thing is the neck. Here it’s a vintage tinted quarter-sawn maple. The tongue extends under the neck pickup and screws to the body with five (not four) screws passing through the recessed neck plate.

The combination of the thin finish and a beautiful fairly deep shape has what you could describe as an almost soft ‘V’, meaning the shoulders are thinned, and we were surprised that the measured depth by the 12th fret is a meaty 25.5mm. It really doesn’t feel it.

“I took the neck profile from my Twangmeister,” says Nik, mentioning the only other bolt-on in the Huber range. “Again, it’s more the Fender approach. Getting back to my Junior appreciation, in the 50s there were so many different neck shapes, but the one where the shoulders are taken away just so much before they become a V, that was the neck for me. It was done by hand and probably an accident. I used to own one just like that, which was stolen.”

Not everyone will get the back-angled three-a-side headstock on what is otherwise a six-in-a-line-style guitar, but the strings pass over the beautifully cut, polished bone nut to the Huber logo’d Gotoh tuners in a virtual straight line. Along with that Mastery bridge and vibrato, this is an ‘offset’ that plays and stays in tune.

Another plus is the headstock truss rod adjustment, although we’d be surprised if you need it. It’s a stiff neck, for sure, and setup is perfectly considered, just like every other detail, with low string height and minimal relief.

There’s good meat on the frets – they are installed into slots routed into the fingerboard so you don’t see the tangs at the edge of the ’board – which measure approximately 2.49mm wide with a good height of close to 1.3mm. The East Indian rosewood fingerboard with its classy circular sterling silver inlays is surprisingly flat for the style with Huber’s standard compound radius of 254 to 356mm (10 to 14 inches).

And there is a distinct feel: the fingerboard sides are quite square, with only a little roll to the edge, unlike the in-turned and more heavily rounded edges of a well-used old Fender.

A quick unplugged strum reveals an almost funky low-tech response thanks to the low saddle-to-tailpiece string angle of the vibrato, plus there’s a lot of ‘dead’ string between those points. In combination with the pickup set it doesn’t suggest a dish we’ve tasted before.

But prepare yourself: the combined talents of Huber, Häussel and Mastery produce a sound that’s simply exceptional. Listening back to initial tracks we recorded with the Piet you’d swear that the neck pickup you’re listening to is a good Strat but with beautiful clarity at no expense of depth.

The bridge pickup is an inspired choice, too, giving definition and a little more rounded power to, say, a Tele or Strat. This is a nicely balanced set, both in terms of output and voicing.

“I have a stash of American maple that is not that heavy and not that hard compared with hard rock and Eastern maple,” offers Nik. “It’s more lightweight and that might certainly help with that clarity you’re hearing from the neck pickup. It’s nice, fairly plain American maple but more on the lighter side – it’s my Piet neck wood.”

Now, anyone who thinks bodywood doesn’t make a difference to the amplified sound of a solidbody guitar, please turn the page now. It does – and here the alder body, compared with the okoume, is slightly scooped whereas the okoume pushes a bit more in the midrange but still with that musical clarity and note separation.

While the Mastery bridge colours what we hear and is serious fun for noiseniks everywhere (pluck behind the bridge for some very other-worldly sounds), leave the vibrato arm in the case and the Piet excels as a classic twin-pickup bolt-on with clarity and some added power if you need.

The simple control setup is very well voiced, too. But it’s not just the sound. Both Piet models here feel excellent on a strap or seated, and the guitar disappears in your hands – it’s extremely absorbing. By design, it feels way less bulky than any offset we’ve played and considerably lighter, too.

As we discuss with Nik over the page in this feature, an awful lot has changed since he began making guitars over two decades ago. The proliferation of small ’shop makers means that if you want to step away from the mainstream to this highly bespoke service, you now have a huge amount of choice.

But experience counts and the Piet shows off a maker in his prime mixing up his inspired sonic references and ending up with a unique instrument that’s effortlessly playable, immaculately dressed and, above all, full of character.

Yes, the offset-style vibrato is a very different drive from a wrapover bridge and therefore won’t be for everyone. And while it might fall into the low tier of Huber instruments, it’s far from a cheap date in terms of price.

But then there is nothing cheap about this guitar, either in terms of its build or indeed the hugely evocative, characterful sounds we hear.