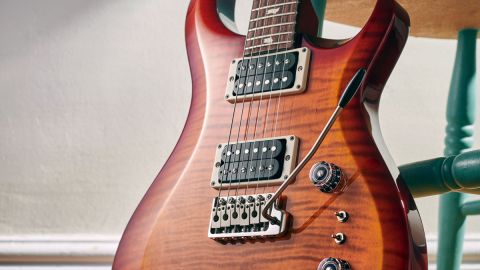 An anniversary special model that perfectly executes the PRS hybrid feel, with clever pickup switching and unparalleled playability. Does production guitar making get any better at this price?

As the original PRS guitar, the 24-fret Custom has certainly earned its place in guitar history. For this milestone year there are three celebratory models – all Custom 24s – starting at the SE level then moving to the USA for the S2 and topped off with the ultimate Core version.

While the Custom itself has constantly evolved over three-and-a-half decades and been the start point for the majority of subsequent PRS designs, it remains very much a halfway house between a Les Paul and a Stratocaster.

In simple terms, it has the wood choice and construction style of the former but with the double-cutaway style and vibrato of the latter. A perfect hybrid? Its detractors, however, see this duality as its biggest failing: it’s not a Les Paul and it’s not a Stratocaster.

While that discussion will continue as long as there are pubs and internet forums, what better way to celebrate this landmark design than with the 35th Anniversary S2 level? The halfway house of the celebratory trio.

At $1,649/£1,799 and including a perfectly good gigbag, it’s a well-aimed price point – like our trio of S2 McCarty 594s we look at later on in this issue – that puts it nicely in competition between Fender’s American Ultra, Original and Professional ranges and Gibson USA’s pricing on the first ‘proper’ Les Paul in the current line-up, the Classic, especially since the standard S2 Custom 24 has a full retail of $1,599/£1,699.

While the two Custom 24s may appear very similar (aside from the 35th Anniversary model’s celebratory truss rod cover), importantly, it’s the way that the humbuckers are split to single coils that differentiates the two models.

The standard model splits the pickups simultaneously via the pull-switch on the tone control, which gives you six sounds when used in conjunction with the three-way lever pickup selector switch. These are partial splits where some, but not all, of the dumped coil is still voiced via a different value resistor for each pickup.

Our 35th Anniversary Custom 24 adds two mini-toggle switches, one for each pickup, to voice the full/split switching of the 85/15 ‘S’ humbuckers individually, giving you eight sounds. And like the circuit on the SE Paul’s Guitar, we’re hearing the true single coil (the slug coil) of each humbucker.

Another change is that the 35th Anniversary version has a three-way toggle pickup selector; the standard model uses a three-way lever. Aside from that, specs and colour options are the same.

Outwardly, the primary difference between the Core-level Custom 24 and the S2 is the different top carve: the Core model is classic carved PRS; the S2 uses a mainly flat-top with almost SG-like edge chamfers.

Consequently, the S2 looks more functional, reflecting its faster build time, but it’s just one of a raft of changes that allows PRS to bring this S2 in at approximately 50 per cent of the cost of the equivalent Core model.

So, the neck here, while made of the same genuine mahogany as the Core guitars, is a three-piece design with a spliced headstock and separate heel stack. The body depth is 44mm, around 5mm thinner than the Core Custom; the one-piece mahogany back is approximately 32mm thick, with the centre-joined slip-matched maple cap being closer to 12mm.

The grade of the figured maple is lower than Core and all the translucent colours are ‘wrap-around’ without the PRS hallmark natural edge ‘binding’. Also, neither the rear control nor vibrato black plastic covers are recessed. Like the Core models, however, the S2s apparently use the same new nitro-over-cellulose finish.

Along with the manner in which they are made, it’s the parts’ costs that further differentiate the two levels. The S2, like the mainly Indonesian-made SEs, uses less-expensive Asian-made electronics and PRS-designed pickups. The Core pickups are made in the USA Stevensville factory in Maryland, the pots and switches simply higher-spec parts.

Country of origin plays a lesser part in the hardware: the S2 vibrato is a two-piece cast design used on both the SE and bolt-on CE models; the Core level, now in its Gen III specification, is machined from solid stock, but PRS is tight-lipped about its actual origin.

Despite that unrecessed cavity cover, we have a standard PRS-shaped cavity, again unshielded like the Core models. Pots here are Alpha 500k audio taper. There’s a slightly different-sized tone capacitor but of the usual PRS value of .033 microfarads and wired in ‘modern’ style. Each coil-split switch is a DPDT and voices (and isolates) the slug coil hence the term ‘true’ single coil.

There’s an additional 820kohms resistor wired between the input lug of the volume and ground, which means that the pickups ‘see’ an approximate 300kohms pot, more like the traditional 250k value used for single coils that subtly pulls down the high-end of the entire circuit. This little tweak is all a part of PRS’s ongoing TCI process.

The Pattern Regular neck profile is “similar to the traditional PRS Regular neck found on guitars made in the late 80s at PRS’s former Virginia Avenue location”, states PRS.

It’s the narrowest PRS profile at the nut – ours measures just over 42mm with a very contemporary depth of 21mm at the 1st fret and 23mm by the 12th – and is a very nicely shaped profile that almost hints at a slight ‘V’ thanks to the well-tapered shoulders.

Fretwire on the comfortable 254mm (10-inch) unbound rosewood fingerboard with its rounded ‘worn-in’ edges seems identical to the Core guitar in width, though slightly lower in height – perhaps a result of the differing production process here.

Of our collection of 2020 PRSes, unsurprisingly, this one sounds most like, well, a PRS! We have the original scale length combined here with that in-tune vibrato and the 24-fret neck, and we’re veering back towards the Custom’s original Fender/Gibson hybrid style that is probably the reason why we’re still writing about PRS guitars today.

Yet it wears its ‘modernism’ with a classic style: you won’t find graphite reinforced necks or stainless steel frets on a PRS electric guitar. As we find with the S2 594s reviewed later in this issue, there’s not a huge sonic gap between this and the CE 24, for example, with its USA 85/15 pickups.

In fact, the true single-coil switching in combination with the ‘tuned’ volume control gives a very Fender-y clarity and character that you don’t always hear from a split humbucker – we seem to have depth and sparkle in equal measure.

And while the 85/15 ‘S’ loves some hefty gain, there’s a strident clarity that seems a perfect vehicle to drive a cramped pedalboard or multi-effects unit. Paul Reed Smith doesn’t like ‘ice-pick’ high-end and we don’t hear it here.

That said, of the five guitars we have on review across this special issue, this Custom has the clearest, most contemporary voicing, which might appeal less to vintage obsessives and more to those of us who simply need a lot of range from a single instrument.

As with any good guitar, the volume control alone is a tone shaper – pulling back a little of the hi-fi sheen yet with a dense pedalboard patch, that full-up sparkle is very welcome.

Guitars like the CE 24 and certainly the Silver Sky will give you a woodier texture, but if you’re looking for that one hybrid guitar, this platform takes some beating, and those mini-switches are so easy and intuitive to use.

Along with its well-trusted vibrato system, it’s a very stable guitar. Intonation is very sweet and it’s an effortless player that in no way feels, or frankly sounds, cut-price.

There are two things that non-PRS players don’t like about PRS guitars: the ‘posh’ aesthetic and the price. The former, of course, is what put the brand on the map, and at this S2 level the latter is redundant.

What the doubters haven’t kept up with is PRS’s continuous desire to make a better instrument. Average is not good enough. If you take your craft seriously, like PRS clearly does, this is a guitar that’ll support your aims and dreams… and then some.