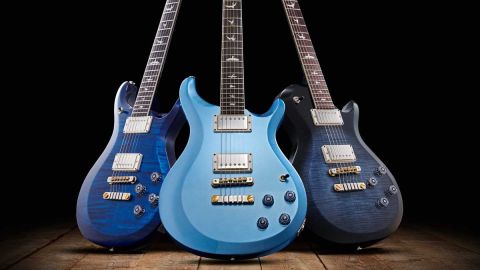 As ever, PRS’s quality proposition is to the fore, just here it’s tempered by a bang-on price point. We really don’t think any of this trio play or sound ‘cheap’, and in these challenging times a saving of around £1.5k might prove to be very important.

The 594 is the closest PRS veers towards the classic ‘vintage-aimed’ Gibson recipe. Introduced back in 2016 in PRS’s Core range, the £3.5k-plus guitars remain out of reach for many of us.

But at the start of this year, this trio of S2 models slashed the prices by pretty much 50 per cent. But let’s backtrack a little… The guitars are named after their scale lengths of 24.594 inches (625mm), the slightly-shorter-than-24.75-inch (629mm) scale actually used by Gibson in its golden days.

PRS’s standard scale length, as used on the Custom or the McCarty, is 25 inches (635mm), very nearly halfway between that Gibson scale and the longer Fender scale length of 25.5 inches (648mm).

PRS fans will also know of its shortest scale of 24.5 inches (622mm), currently used on the Santana Core and SE models and the SE 245s. Apologies for all the maths, but clearly this scale length stuff is important.

Although locking tuners are synonymous with PRS guitars (both vibrato and hardtail), all these S2 594 models go for vintage-style non-locking tuners.

The one-piece wrapover bridge, with its preset intonation ridge, dates back to the first Dragon guitar PRS produced in 1991. This later two-piece setup references a Gibson tune-o-matic/stud tailpiece but with different ingredients.

A more obvious change to the PRS design concerns the bridge and tailpiece. Usually we’d see a PRS Stoptail or vibrato, but here we have a separate bridge, with wide-topped brass saddles and open-slotted tailpiece: PRS’s update on Gibson’s tune-o-matic bridge and stud tailpiece combination.

“The bridge is zinc, not an alloy,” PRS tells us. “It is cast and minimally machined and nickelplated. The saddles, saddle screws, studs, and thumbwheels are all raw [unplated] brass. The tailpiece is cast aluminium, but the studs and stud wells are machined – raw brass/raw steel respectively.”

Private Stock or limited runs aside, you’ll only see this combo on the Core 594 models or these S2s.

The third element of difference to the 594 concerns the controls and their layout, which follow Gibson’s classic positioning – not the four-control layout of the original and subsequent PRS Singlecut models. Plus, for the first time on a PRS double-cut outline guitar, the three-position toggle pickup selector switch is placed on the bass-side horn.

In keeping with the vintage vibe – and without a vibrato in sight – the tuners are non-locking vintage Kluson style in the appearance of their rear covers with cream-coloured ‘faux-bone’ tulip buttons, but the string posts are unplated and we’d wager there are no plastic washers inside. They’re slightly different from the tuners on the Core 2020 McCarty, which have shorter string posts.

As we discuss with Paul Reed Smith and Jack Higginbotham earlier in our anniversary feature, the S2-level guitars – still made in the same USA factory in Stevensville, Maryland, as the Core level – are all about production efficiency, which equals lower cost, primarily in materials, parts and all-important labour time.

The S2 necks, then, are three-piece (not one-piece like the Core models) with a heel stack and spliced-on headstock.

As with all the S2 (and SE) guitars, the ‘S’ pickups are PRS-designed and made offshore. Don’t let that put you off – originally designed for the SE Hollowbodies, these 58/15 ‘S’ humbuckers sound great.

The neck might be threepiece in construction but it still joins the body in classic PRS style; the full width of the neck slots under the neck pickup.

It’s all about the details. PRS’s proprietary tweaks, such as these pickup rings, include recesses for the height-adjustment screws.

Parts are made offshore – exactly where PRS doesn’t tell us – while the ‘S’ suffix pickups are designed by PRS and made in Indonesia and are the same ones that you’ll find on the now mainly Indonesian-made SE models.

So, while the double-cut 594 is a real hybrid of PRS and Gibson style, the Singlecut is noticeably thicker in depth at 51mm (two inches) compared with the 48mm (1.89 inches) of the double-cut, and is clearly aimed at the classic Les Paul.

That additional depth increases the ratio of mahogany to maple, too – the maple top is the same thickness on both models at just over 13mm. Our third design here, the Thinine, is clearly aimed at SG territory.

It has the thinnest depth body (43mm) and it’s all mahogany with no maple cap like its inspiration, while the toggle-switch position moves to north of the four-control layout, making for a less convoluted wiring layout because the wires from the pickups’ volume controls don’t have as far to travel. And it’s the same for the wire from the switch to the output jack.

Fit and finish is typically sharp, but the S2 models have a distinctly different chamfered edge top-carve with no inset control ‘dishes’ – or recessed rear control covers. This more simplistic build is all a part of the S2 ethos: maximum quality, minimal labour cost in terms of things such as hand-sanding compared with the Core guitars.

That said, as of 2020, all USA PRS guitars (with the exception of Private Stock and the DGT) use the new nitro-over-cellulose finish as Paul Reed Smith discusses in our 2020 McCarty review elsewhere in this issue.

The neck shape on our maple-topped models is the same Pattern Vintage profile; the Thinline differs with its Pattern Thin neck, slightly wider at the nut but slimmer in depth (see the Dimensions chart).

On all three, the fingerboards are edge-bound and although the fretwire gauge is pretty much identical to that used on the Core McCarty in terms of width, it is marginally lower in height, again subtly altering the playing feel. Meanwhile, the fingerboard radius remains slightly tighter at 254mm (10 inches) compared with Gibson’s 305mm (12 inches).

As you’d expect, there’s a fair amount of similarity here, certainly in terms of the neck shape of the maple-topped models, but the three 594s have distinctly different characters. The heaviest of our trio with the chunkiest body, the Singlecut makes no bones about chasing a Les Paul.

The Thinline is considerably lighter and almost acoustic-like in its unplugged response, which is hugely vibrant. The double-cut 594 sits between the two in terms of weight and, to a certain extent, style.

Whatever you think about Paul Reed Smith’s theories – the importance of the acoustic sound of the solidbody guitar, differences between tuners, nut material and bridge/tailpiece components and so on – these three are extremely ‘alive’ guitars.

In general terms, there’s quite a sweetness to the voicing of all three; they reference an older played-in-quality electric. The slightly lower fretwire gauge perhaps adds to that more classic illusion.

Having reviewed the SE Hollowbodies for which these 58/15 ‘S’ pickups were originally conceived, they are fast becoming one of this writer’s favourites. There is far from a chasm between these and the USA-made pickups, and listening here – to the whole package, of course, not just the pickups – we don’t feel short-changed.

S2 Thinline
All three guitars here use the same circuitry, although the parts are of a slightly lower grade than you’ll find on the Core guitars with either Alpha or Jin Sung 500kohms audio taper pots.

All are wired modern-style, too, with no treble-bleed caps on the volume controls, and the tone caps are still the same .033 microfarad value, though different from the Core caps. You can have fun listening to the difference!

Each of the tone controls have a pull-switch to independently split the pickups. Each is a PRS-style partial split via a resistor, but here it’s the slug coils that are primarily voiced unlike the screw coils, for example, of numerous other PRS two-control guitars.

Obviously the double-cut comes closest to our Core McCarty, for example, and purely on a sonic level it offers really wide stylistic versatility with the single-coil voices impressing from the off; they’re slightly less strident than the Core McCarty, a little snappier.

Bridge pickup to bridge pickup, well, it’s very close, both sounding less honky or spiky than the Seth Lovers or Burstbuckers of our Knaggs and Gibson references, a little more refined.

The Singlecut might aim at the Les Paul, but the single-coil voicings open up way more subtle shades hinting at pre-humbucker P-90-like voices that are underpinned by a very solid tonal foundation: for older, snappier classic electric blues, it’s a combination that’s really appealing.

You also have the ability to mix neck humbucker with bridge single coil, and vice versa. Yes, it can do grunt and seems marginally thicker in the lower mids with a subtly different vocal character to the mids than the double-cut, but there’s something in the whole package that has more complexity and subtlety.

While the controls and circuits are the same for all three S2 594s, the toggle switch on the Thinline moves from the bass-side shoulder to the control area.

PRS’s bird inlays grace the majority of guitars the company has built. They were in use before Paul Reed Smith started his first factory in 1985 and first appeared on a guitar he built in 1976 for Peter Frampton

Part of the cost-saving effort on the S2 guitars is the unrecessed control covers for the guitars’ back coverplates.

35 years on, the PRS headstock remains instantly recognisable and offers near-straight string-pull over the friction-reducing nut: one of many subtle reasons for the guitars’ renowned tuning stability

Next, however, we plug in the Thinline and its more focused voice trims the bass a little and slightly rounds the highs; it’s that midrange character that shifts again.

It’s classic mahogany SG-ish grind and one of those planet-aligning combinations. The double-cut and Singlecut are very good, but this Thinline really kicks – vibrant, alive and an effortless player.

The 594 recipe certainly sweetens the pill for those of us who either grew up with or are long-time owners of Gibsons and the like. The S2 594 double-cut here has obvious appeal, not least to existing PRS owners who enjoy that now-classic outline but not necessarily the ‘don’t-even-look-at-it’ vibe of the higher level Core version.

The Singlecut has never excited the market as much as the PRS’s double-cut, but if you’re in the market for a sub-£2k single-cut you’d be silly not to audition this one.

Which leaves the Thinline as the runaway success: a more rock ’n’ roll vision that (bird inlays aside) ditches the ‘posh maple’ aesthetic and offers a slightly lighter and more vibrant sound, particularly to those of us who find the SG hugely appealing but can’t get on with its ‘long neck’ geometry. It’s a guitar with a lineage from the PRS Mira, but this Thinline has the proverbial rocket up its backside.

Some might find those flat chamferededge maple tops a little, erm, cut-price-looking and we can’t help thinking that some solid colours (with a plainer maple underneath) would broaden the appeal. As the Thinline illustrates with its metallic blue finish, it’s quite the looker and stylistically further distances the S2 from the Core models.

But, as ever, PRS’s quality proposition is to the fore, just here it’s tempered by a bang-on price point. We really don’t think any of this trio play or sound ‘cheap’, and in these challenging times a saving of around £1.5k might prove to be very important.