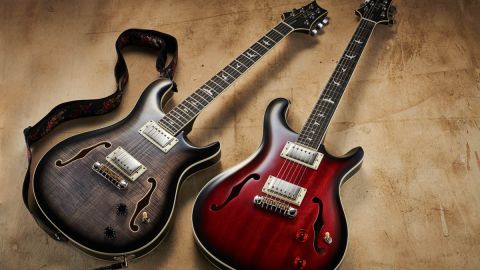 Finally, two PRS Hollowbodies that we can afford, and with upscaled body and headstock, a near flawless finish and classy pickups, they were worth the wait

We’re barely out of 2019 and PRS has announced its first wave of models for the new year, its 35th as a production company. Among the new models are this pair: the SE Hollowbody Standard and the Hollowbody II.

It’s little surprise that PRS’s f-holed hollow electric guitars were originally conceived by Joe Knaggs, who at the time described himself as an “ex-jazz guitarist”. These SE Hollowbodies certainly reference that original 20-something-year-old design (still available in PRS’s USA Core range), but they actually amount to a virtually complete redesign.

Where to start? Officially launched in 1998, the PRS McCarty Archtop and the ongoing Hollowbody guitars (the McCarty name is now used only on the 594 Hollowbody II) were, and remain, solid-wood constructs, the build made possible by CAD design and CNC routing.

These new SE versions, however, revert back to the style of a more classic hollow or semi-acoustic guitar. The bodies – top, back and sides – are laminated, like the classic Gibson ES-335, for example. The Standard is spec’d with five-ply mahogany; the II has the same mahogany sides but adds both a five-ply maple top and back with a flamed figure. On both, the top laminate measures just under 4mm thick.

Along with that fundamental change, the SE Hollowbodies are slightly increased in size, too, including a bigger-looking upper horn. One reason could be the difficulty in replicating the relatively small horn of the original PRS design in this old-school construction method.

The overall depth of both is similar to the original at around 72mm; likewise, the rim depth of 42mm. Interestingly, too, the headstock outline is enlarged: the SE’s head measures approximately 165mm long by 95mm at its widest point; the original is 153mm by 87mm.

Both guitars use a very simple control setup of master volume and tone with a three-way toggle pickup selector. There are no coil-splits as we see on many PRS guitars.

The primary difference between the two SE Hollowbody guitars is the wood used for the top and back. The Standard uses a five-ply mahogany that you can see at the edges of the unbound f-holes.

True to its name, the Hollowbody is free from a center block, unlike an ES-335. Instead there’s a small block that sits under the bridge only and connects the top to the back and allows PRS to use its Stoptail bridge. On both SE versions here it’s the adjustable style – although the block, which you can see through the f-holes, is obviously a separate piece of what looks like maple.

Internally, the guitars are very tidy. As ever, the full-width neck forms the heel and slots under the neck pickup cavity. Unlike many laminated hollowbodies, there is no top bracing but there is an additional block support, approximately 22mm thick, under the top between that bridge block and the end of the neck.

In keeping with the more acoustic-like construction style, we have kerfed linings to provide enough gluing area for the top and back to be attached to the relatively thin sides.

If the body here is very different, the mahogany neck is more familiar: PRS’s Wide Fat profile, set into a large neck block. Like the sides on both our finishes, the neck is painted opaque black so you can’t see if it’s one-piece or not. On the back of the headstocks, as usual, PRS states exactly where the instrument is made: by Cor-Tek in China.

The headstock is bound – like the fingerboard and the body’s top and back edges – and has what looks like a striped ebony or possibly rosewood facing. It is, in fact, a stained basswood veneer.

There’s more unfamiliarity with their ebony fingerboards, rarely used by PRS. Fret gauge is smaller (spec’d at 2.64mm wide by 1.17mm high) than the current SE Santana Trem (2.79mm wide by 1.40mm), for example. The ends sit over the binding on the usual 245mm (10-inch) cambered fingerboard, which is noticeably striped on the Standard, less so on the II. There’s a slight shimmer to the solid pearloid bird inlays, too, which certainly aren’t as showy as many used by PRS.

The covered 58/15 ‘S’ pickups are Indonesian-made versions of PRS’s USA 58/15 humbuckers developed specifically for these guitars.

They utilise PRS’s ‘TCI’ technology “to prove what your ears are hearing and using the data to manipulate the nuances of sound to ensure your ears are working correctly”, adds Jack Higginbotham.

The Hollowbody II uses a five-ply figured maple top and back; the sides on both guitars are laminated mahogany.

This is the same adjustable wrapover Stoptail bridge that is used by PRS on various models throughout its ranges. It’s ideal here if you want to string either SE Hollowbody with heavier gauge or even flat-wound strings.

While it might be surprising that these models are made in China, there is no doubt about the quality of the build. Both guitars are near flawless.

While we’re seeing more proprietary parts used across PRS’s three ranges – such as the Private Stock bridge used on both the SE and Core versions of Paul’s Guitar and here the same adjustable Stoptail bridge you’d find on an S2 or Core model – that sharing doesn’t extend to PRS’s pickups.

As usual, we get Asian-made ‘S’ versions of existing PRS designs; in this case the covered 58/15. There’s no mention of the new TCI ‘tuned’ system we’ve seen on the SE Paul’s Guitar or the SE Santana Singlecut Tremolo, and the humbuckers here are simply controlled by a three-way toggle selector, master volume and tone.

The upscaling of the design might seem slight on paper, but it’s surprisingly noticeable. An original Hollowbody Spruce, slightly lighter than either SE, now feels a little small, especially when played seated – although the new SE outline is still a long way off the ES-335’s 406mm (16-inch) wide body.

Diehard Hollowbody fans might not admit it, but, to us, the SE version feels better. The slightly expanded size feels more like a proper semi whereas the original is – and feels like – a hollowbody crammed into a solidbody size.

The Wide Fat neck is the biggest offered by PRS (now called the Pattern profile on the USA Core models) and adopts a quite classic Gibson-esque girth in upper positions with less depth and a hint of a V in lower positions.

Both guitars have been smartly set up and aside from a little more polishing being needed on top of some of the frets, each of these models plays exceptionally well out of its case. We did need to check pickup heights on the Standard as the bridge pickup was placed quite low, but, really, that’s nothing to moan about.

If our USA Hollowbody along with an all-mahogany Singlecut Hollowbody sound a little more acoustic-like, the SEs certainly seem a bit more ES-like initially. Both feel a little more damped than the USA comparisons, again more akin to a less-hollow build.

There’s quite a different response from the two SEs, though: the Standard sounds a little roomier with a slightly louder, more fundamental voice, while the II is not quite as loud with a little more snap to the response. Both are noticeably more hollow-sounding than a centre-blocked semi, though.

When amplified, the II has somewhat more clarity, snap and bite than the darker, moodier Standard. The quality of sound is very impressive, though, with clean lower mids (the neck pickup really sounds good on the II) and a smooth, not sharp treble response.

Swapping between the two, the Standard’s darker voice may make it the less versatile for some: rolling the tone back things do get a little woolly, whereas the II’s tone can be knocked back a little to simulate the darker voice of the Standard then pulled back up if you need a little more clarity.

It looks like the standard PRS headstock outline, but it’s actually enlarged to suit the upscaled body. This makes it the same dimensions that PRS uses on its SE acoustic guitars.

Both SE Holllowbody guitars employ an ebony fingerboard – quite a rarity in PRS’s history, although commonplace in the archtop world.

Like the USA Hollowbodies, yes, you’ll get feedback if you’re using higher gains and volume, not to mention if you’re close to your amp on a crowded small stage. Always difficult to determine or predict, both SEs seemed a little more comfortable with higher volume, certainly more so than the USA Hollowbody Spruce.

It all means both guitars are almost blank canvases in terms of the sounds you can create. They are not designed to nail a specific vintage tone, but both veer more towards a hollow ES-330 than the more solidbody-sounding ES-335.

For players wanting to add jazzier, bluesier flavours you’d be very much at home here, but with some crunch, the voicing on the 58/15 pickups offers a clarity, whereas both our USA Hollowbodies, and a couple of centre-blocked ES-335-style guitars, sounded a little congested.

To be critical, it’s a shame PRS didn’t give these the four-control shoulderplaced toggle treatment of the 594: in that guise they’d really give the near-generic thinline-semi market a run. Conversely, the simple drive with no coil-splits really does focus you on the playing.

While the majority of the SE line-up apes the style of the Core models, it’s far from a range that just replicates the USA line. There are models such as the well-loved Zach Myers Semi-Hollow, the new SE Mira and Starla, the Mark Holcomb models, even the Santana Singlecut Trem that are unique to the SE line, and these SE Hollowbodies illustrate just how things are changing – the SEs are becoming very much their own thing.