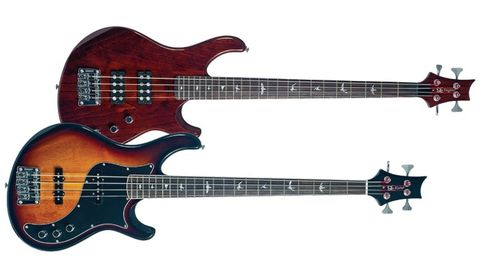 A pair of solid solidbodies - one sexy J-style groove machine and a classic spank plank.

In Anne Lamott’s now-classic 1994 book on writing, Bird by Bird, the author recalls her father’s warm advice to her tearful brother, immobilized by the huge task of a school report on birds he had put off for months: “Bird by bird, buddy. Just take it bird by bird.”

That thoughtful, one-at-a-time approach is a fine recipe not just for daunting tasks, but for producing just about anything with quality and attention to detail. It’s a sensibility captured in the array of distinctive bird shapes in PRS Guitars’ distinctive fingerboard inlays.

PRS is known for careful, quality design and construction, and that has carried over to the company’s modestly priced SE import series, to which PRS has now added a pair of basses.

Two in the bush

Though the Maryland-based manufacturer is best known for high-end single- and double-cutaway guitars, the SE line has made PRS a serious mid-priced contender in the bass world. And although the Kestrel and Kingfisher are the first SE basses, for the last 15 years or so, there has always been a bass in the flagship line.

The latest is the refined, carved-top Gary Grainger Bass, whose ambitious design profile is evoked in the Kestrel and Kingfisher. Yet the SE basses take greater inspiration from the pantheon of electric bass classics.

The SE Kestrel is a J-style instrument with proprietary PRS single-coil pickups and other Jazz Bass aesthetic touches, while the SE Kingfisher has a 24-fret neck and passive MM-style humbuckers with massive polepieces. Both are named for birds known for swooping down on their prey.

Both bodies have a slight offset slant that hints at the classic Jazz Bass silhouette, but are slightly wider across the body. Through our test Kingfisher’s luscious translucent mahogany “Tortoise Shell” stain, I could clearly see all five neck laminates sandwiched between the wide grain of the swamp-ash body wings.

The Kestrel looks darn sexy. Atop our tester’s tobacco sunburst finish sits a curvaceous Jazz-inspired black pickguard that flatters the body’s shapely hips. The black stain at the sunburst’s outer reaches extends across the back of the instrument and along the back of the neck, which has a glossy touch.

The rosewood fingerboard is neatly trimmed with expertly applied white binding and black position dots. Instead of the matching block inlays you’d expect on a ’70s-style J-Bass, the fingerboard hosts nine inlays of birds in different stages of flight. The other obvious PRS calling card is the headstock’s whimsically skewed 2+2 shape, but I was a bit disappointed that the headstock face says “SE” instead of “PRS.” I guess I’m not as immune to brand consciousness as I like to think.

The stately Kingfisher’s seductive see-through finish extends its glossy feel across the back of the body and up the neck. The Hipshot Transtone bridge on both instruments allows for throughbody or through-bridge stringing.

The Kingfisher’s pots are wired through a cavity in the back, while the Kestrel’s volume-volume-tone controls sit in a top-routed control cavity wired to the pickguard. Both cavities have tidy wiring and are well shielded with conductive paint and foil on the cavity covers, but both are quite compact, so don’t plan on any modifications that require real estate. The Kestrel’s particularly petite control cavity is reflected in the knob’s tight spacing.

Birds in the hand

The Kingfisher played beautifully, with a sonic and tactile evenness across the strings and throughout the neck. At first the E string was a bit hotter than the others, but after a quick string-height adjustment with the smallest Allen wrench in the included kit, everything was copacetic.

From bottom to top, the Kingfisher’s neck has room for three octaves and change, and I found that access to the highest playing positions was gratifyingly easy. I’m about as likely to play above the 20th fret as I am to transcribe “Portrait of Tracy,” but the expansive terrain had me venturing into the more upscale neighborhood of, say, the 12th through 17th positions, and finding a higher groove perch from which to swoop back down to the lower playing positions.

With the extra-long fingerboard as well as the extra-wide footprint of humbucking pickups, a balance needed to be struck between providing ample room for slap-and-pop techniques and positioning the pickups for adequate sonic versatility.

Whether the tradeoff here works for you depends upon your playing style and taste. I initially found the spacing between the front pickup and the end of the fingerboard to be a little snug for slap and pop, but I got used to it, and I loved the fingerstyle feel and sound at different playing positions.

The sonic divide between the two pickups isn’t major, but the front pickup has more beef, and the back has toastier bun. The real versatility comes in varying your plucking position and technique.

Plucking back by the bridge, the soloed back pickup offers a stout take on J-style bridge tone, but without the typical single-coil hum. Whether or not the fatter front pickup is engaged or soloed, the sound is always clear and cutting, never muddy or inarticulate, even with the tone knob rolled back.

Like the Kingfisher, the SE Kestrel balanced well seated or strapped. Its slim neck profile and 22-fret range felt like familiar J-Bass territory, and the trad-style binding and bird inlays looked sharp.

Having these visual motifs in my peripheral view was a surprising source of inspiration and good vibes. The Kestrel arrived with the strings set up with a slightly exaggerated arc that placed the E and G strings closer to the pickups, resulting in noticeably hotter output than the middle two strings. This was remedied in seconds, thanks again to that tiny allen wrench.

With the tone knob full up, the back pickup yielded a punchy growl that was somewhere between Geddy Lee’s grinding riffage and Jaco’s Jerry Jemmottinspired finger funk. Playing back by the bridge with the front pickup soloed served up lean beef—fat and juicy, but still pretty good for you—while moving my plucking hand toward the neck pickup and beyond brought forth a bigger, rounder sound that stayed punchy and coherent, even with the tone knob down.

Both pickups full-up produced a big slapping sound, but I liked the thick G-string pops that came from rolling back the bridge pickup halfway.

Both Kestrel and Kingfisher offer a variety of colorful tone plumage for rockin’ in the treetops or diving into the deep. They’re both incredibly well built, attractive, and affordable. Add these to your aviary and you’ll have a lot to crow about.