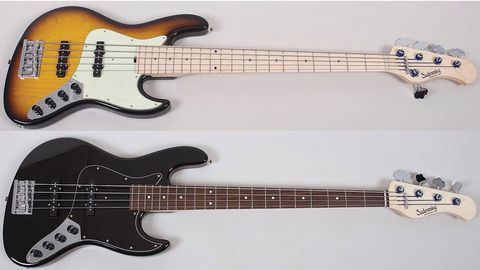 Sadowsky brings its superb souped-up J-style basses to the masses, and they hit the mark.

When Leo Fender dreamed up the jazz bass around 1960, he couldn’t have known how enormously influential it would prove to be. Designed as the more svelte and sonically flexible alternative to the Precision Bass, the J-Bass is arguably the more impactful instrument.

Offering two pickups, a contoured body, and a fast neck, the J is the archetype for nearly every two-pickup bass that followed. And there is no place where that’s more obvious than in the over-saturated J-style copy market, a corner of the bass pool where it seems like nearly every manufacturer has at least dipped a toe.

While we might take the category for granted now, upgraded and decked-out J-style basses owe as much to Roger Sadowsky and Sadowsky Guitars as they do to the Fender original. The New York builder came to prominence in the late ’70s as one of the city’s go-to Fender repairmen.

An early partnership with Marcus Miller, who famously installed a Stars Guitars preamp in his ’77 Jazz, further burnished Sadowsky’s reputation, and before long he was building his own J-style basses from his New York shop. Little did he know then that in doing so, Sadowsky pioneered an entire segment of the bass market: Jazz-style basses made with exacting attention to detail, and boasting mods that improve playability and durability and broaden tone.

Sadowsky’s sterling reputation has earned his basses high price points, but about 15 years ago Sadowsky began offering the made-in-Japan MetroLine in partnership with Yoshi Kikuchi, a Japanese luthier who had spent a year in the New York shop learning how to build to the brand’s exacting standards. The MetroLine made Sadowskys more affordable and were a hit—but still, they aren’t cheap at around $2,600.

Knowing that the sub-$2K range substantially broadens a bass’ marketability, Sadowsky paired with Kikuchi again to create the factory-built MetroExpress instruments reviewed here. By automating some of the production process and limiting the available options and finishes while retaining the electronics and hardware of his New York-built instruments, Sadowsky has successfully delivered basses that are just as killer, at a fraction of the cost.

I tested both a 4-and a 5-string MetroExpress. The basses don’t differ just in string count, they also feature different body and fingerboard woods. Sadowsky pairs an ash body with a maple fingerboard (often thought of as the ’70s Fender style) and an alder body with a morado fingerboard, a rosewood-like wood which, combined with the alder, echoes the ’60s-era Fender formula. Regardless of the wood, one immediately notable quality of the basses is their light weight: Each weighs approximately 8.5 pounds.

As I’ve always experienced with Sadowsky basses, the Metro-Express test basses boasted bulletproof, faultless construction. The hardware and electronics were skillfully and cleanly installed, and the fretwork was impeccable, with smooth edges and perfect crowns. The finishes, while not exotic, were expertly applied, without any imperfections or rough spots.

Similarly smooth were the lovely and fast nitro-finished necks; they had a meaty, but nowhere near chunky, profile that just felt right. The neck was stable and seemingly immune to the vagaries of Bay Area springtime weather—no doubt the dual inlaid graphite strips help.

In addition to their exceptional quality, Sadowskys are renowned for their electronics, centered around a JFET-powered boost-only 2-band preamp with a passive tone control. I’ve long extolled the virtues of passive tone knobs on active basses, and it’s especially cool with the Sadowsky, given that its preamp is a boost-only design.

As I described in my August ’17 review of Sadowsky’s outboard preamp pedals, the circuit is one of the most musical around, with well-voiced and broad-spectrum bumps at just the right frequencies and a remarkable ability to never sound harsh or shrill. Not many instruments can boast a signature sound, but Sadowsky is definitely one of them, and a lot of the mojo resides in the excellent preamp.

The instruments’ light weight, coupled with the J’s familiar comfy contours, made my Sadowsky testers exceptionally comfortable and well balanced. High-fret access is decent for a traditional J-style bass, and the basses’ overall solidity, quality, and resonance imparted that inspiring vibe I get when I’m charmed by an instrument.

I tested the pair of basses with a variety of amps, including a Wayne Jones rig and an Aguilar rig, and in my studio with a Neve front end going direct to disk. Both the 4-and 5-string were essentially the sound of a certain kind of slick and sophisticated Jazz-inflected tone that is practically a genre unto itself.

For an excellent example of what I mean, go listen to Will Lee on just about anything. The Sadowsky sound represents an evolutionary step from the passive Jazz Bass, with a ton more depth, sheen, and dare-I-say “modern” character. I’m not indicting passive Fenders (my favorite basses)—I’m trying to place the singular Sadowsky sound in the pantheon. The lows are big, strong, and supportive, but never muddy and indistinct. The mids are present, but not too aggressive, while the treble is sweet and airy.

Boosting both EQ bands yields the slightly scooped sound that’s perfect for slap bass, while using the tone control yields an array of sounds that can ape just about every Fender era, and then some.

As the owner of my fair share of hyped-up J-style basses over the years, I know the breed well. It’s always nice to come across a Sadowsky and remember how, why, and where it all started. The MetroExpress instruments are a steal, given how much of the U.S.-bass vibe they convey for so little money.