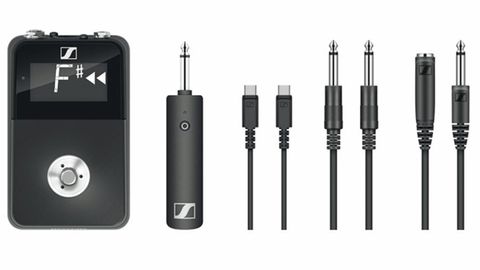 As much as I still love plugging in cables between my guitar and amp, it’s hard to dispute the untangled freedom and clear fidelity many of the new digital wireless systems currently offer. Even more astonishing is that most of these wireless units are remarkably affordable for working guitarists.

The bigger question is, which is the best one for your applications? While I can’t make that decision for you, I can tell you I’ve tried many - from compact to rack - and the new Sennheiser XSW-D Wireless Digital Pedalboard Set is a professional wireless system that sits smack-dab between budget- and touring-grade wireless systems.

With intuitive one-touch operation, a pedal-based (pedalboard) receiver that doubles as a tuner and a compact plug-and-play transmitter with a rotatable guitar input jack, the Sennheiser XSW-D Set is hard to beat.

Including the items above, the Sennheiser XSW-D Set comes with accessories such as receiver power supply, 1/4-inch extension cable, belt clip and two charging cables (USB-C to USB-C and USB-A to USB-C).

But the more important details are its digital 2.4 GHz operating frequency for worldwide and license-free compatibility (the Federal Communications Commission subjects certain frequencies to paid licensing), an operating range of 250 feet, up to five hours of battery life on a single charge, muting from either transmitter or receiver, switching between multiple transmitters linked to the pedalboard receiver, and the ability to configure any combination of transmitters and receivers.

Of course, the most enticing feature is its one-touch operation. After plugging in the stompbox receiver from my pedalboard, pairing the transmitter to the receiver by simply holding the power button till the mini LED blinks green, the whole system was up and running in seconds with an absolutely clear and uncompressed signal.

It’s ridiculously easy to use and sounds flawless, and the tuner works amazingly well, with a huge and bright LED display. Muting is as simple as hitting the footswitch on the pedalboard receiver, or by holding the power button on the transmitter until the LED turns yellow. And, in case you’re wondering, yes - it’ll be very hard for me to go back to cables.