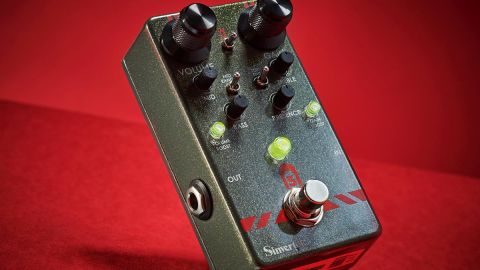 A super-tweakable distortion pedal that offers a wide variety of drive tones and actually fulfills the promise of an extra gain channel for your amp.

You may be skeptical of similar claims from Sinvertek - the company behind the TG Best Buy-winning Fluid Time MK II analog delay - that the Drive N5 acts as a ‘tube amp overdrive channel’, but this feature-rammed stompbox is one of the few that actually delivers on its promise.

The Drive N5 is an evolution of Sinvertek’s original Distortion No. 5, which met considerable acclaim thanks to its ability to mould itself to the frequency response of any amp via a four-band EQ and bevy of switches.

The Drive N5 sweetens the formula with an improved dynamic response when you roll back your guitar’s volume knob, and an expanded range on every control.

There’s a ridiculous level of gain on offer, which you can tailor to sound more American or British using the three-way midrange selector switch, and if you fancy more definition, the top-end switch allows you to increase the pick attack on the high-end.

The pièce de résistance is the mode select switch, which you can set so that hitting the footswitch adds a volume bump, gain boost or both: one stomp activates the boost and a double-tap bypasses the pedal. It’s a killer feature for a stompbox this size and does away with the need for an additional pedal for solos.

It’s hard to say that any pedal is the ultimate drive, but the N5 is such a straightforward route to great tone that it genuinely does add an extra distortion channel to any clean amp. High 5!

For more information, head to Sinvertek.